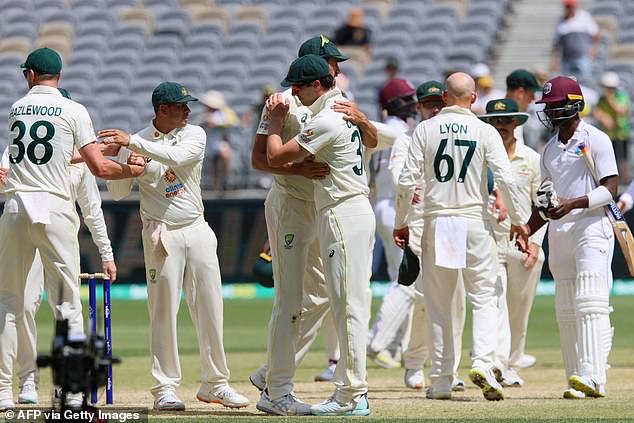 A predicted sell-out at the Gabba for the first Test against South Africa just a month after a diabolical crowd in Perth has laid bare the complex issues facing Australian cricket’s perception problem.

Many former Aussie legends, including Michael Clarke and Adam Gilchrist, have said fans have been voting with their feet when it comes to the men’s side.

Over five days in Perth, just 41,918 fans attended the first Test match of the summer against the West Indies, while there were more seagulls than people flocking to an irrelevant ODI series with England that started just days after the T20 World Cup.

After a glorious era led by Mark Taylor, Steve Waugh and then Ricky Ponting, controversy has since continued to plague men’s cricket in Australia, though the women are enjoying sky-high sentiment thanks to the broad appeal of players like Alyssa Healy and Ellyse Perry.

The Aussie side celebrates, with a near empty crowd in the background, winning the first Test in Perth. A much better crowd is expected for the South Africa series

When he effectively appeared to force Cricket Australia’s hand into dropping a $40million sponsorship with energy company Alinta due to his climate change agenda, opinion of the national side plummeted even further.

Cricket Australia denied Cummins had any hand in the partnership not continuing beyond the year in a statement, but the public perception remains the same.

But is an outspoken climate change agenda the reason why fans in Brisbane will pack into a sold-out Gabba for day one of the Test against South Africa…but not for the first of the summer against the West Indies in Perth last week? 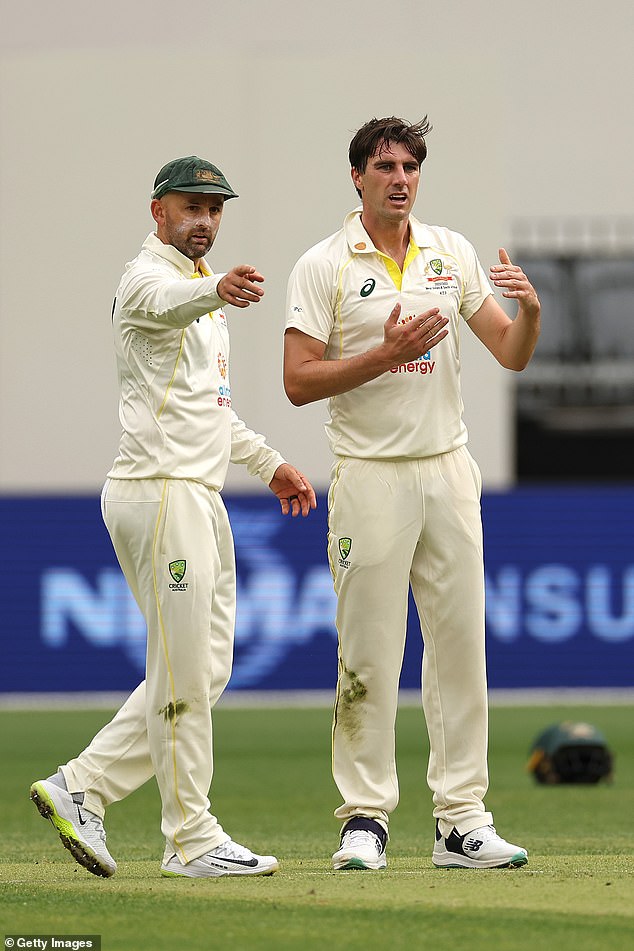 Aussie skipper Pat Cummins (right) and popular spinner Nathan Lyon (left) look on during the first Test against the West Indies. The men’s Test side in particular has faced a rollercoaster of public sentiment

The climate-focused Greens party picked up four inner-Brisbane seats in the Federal election; but that is a long bow to draw and inference from.

New research from True North suggests many would prefer Cummins and his teammates stick to cricket, but the players are also bearing the brunt of the ‘failings from Cricket Australia’s head office’, according to News Corp.

‘The Australian men’s Test team often bears the brunt of failings from Cricket Australia’s head office and the sport’s ability to shoot itself in the foot,’ the report said.

The ball-tampering saga and the ugly handling of Justin Langer and Tim Paine’s departures as coach and captain respectively by head office are easy examples than that.

However True North’s director, Chris Hobden, said it was still clear Cummins and co’s outspoken views very having some affect. 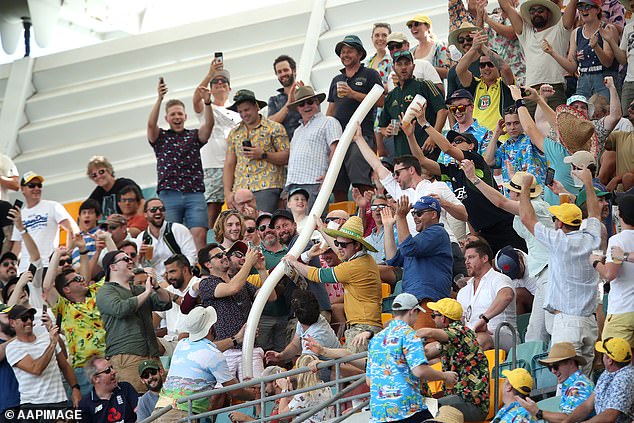 A rowdy Brisbane crowd creates a ‘beer snake’ in the first day of the Ashes Test at the Gabba last year. Another sell-out is expected on day one against South Africa…in stark contrast to the diabolical crowds for the West Indies match in Perth 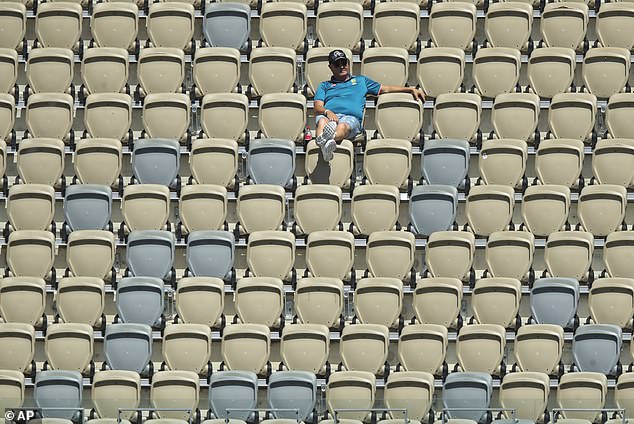 ‘Cricket fans fall on either side of that debate (whether sports stars should raise cultural and political issues),’ he told the report.

‘There is a cohort, often younger, who are more likely to be pro climate change. On the opposite side, there are those who have more traditional views.

‘The former are largely supportive of sport playing a role in sustainability and reducing its impact on the environment as they hold similar views, but there are others, particularly an older cohort, who feel sport should not be getting involved in these issues,’ said Hobden.

Apart from that, there is the sadly obvious fact that South Africa present a much better quality, and popular, opponent than the West Indies. 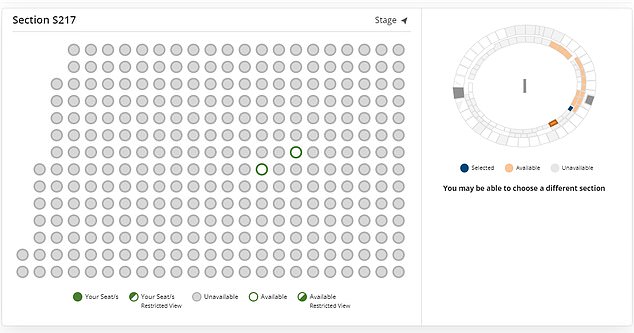 An image from the Ticketek site (green circle is free seats, grey is taken) shows just two seats are available in one of the bays at the Gabba for day one of the first Test against South Africa on December 17 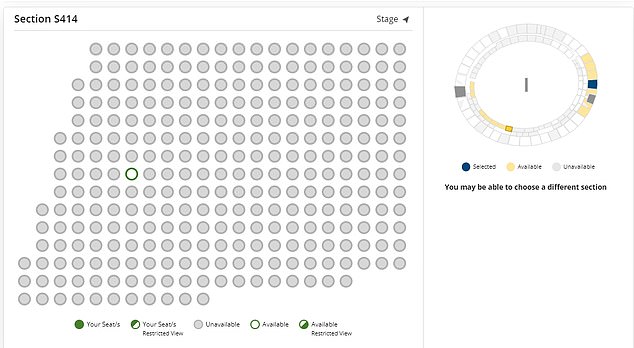 Just one seat is available in a similar bay well over a week prior to the game – in stark contrast to the day before the Perth Test, where full bays were available at Optus Stadium

Particularly when the Tests against the former lie in the school holidays instead of a graveyard Day 1 on a Wednesday; as was the case in Perth.

‘They started the Test Match (against the West Indies) on a Wednesday and that’s not friendly for people who are at work or kids who are at school,’ Aussie Test legend Damien Fleming said on SEN Radio on Wednesday.

‘It’s not in school holidays and it’s against an opposition that, let’s be honest, not a lot of the public knew before that Test Match.

‘The Gabba, in a couple of weeks’ time (for South Africa) is getting closer to those school holidays, is almost sold out,’ said Fleming.

The first Test against South Africa, who are ranked third in the world, starts on December 17, smack bang in the traditional summer of cricket.

A press release by Cricket Australia on Tuesday said they were expecting a sell-out for the first day, with just a few hundred tickets available; something that is plain to see when you try and buy tickets on the Ticketek site.

That’s in stark contrast to the fact only a few thousand were tickets were sold prior to day one in Perth last week. 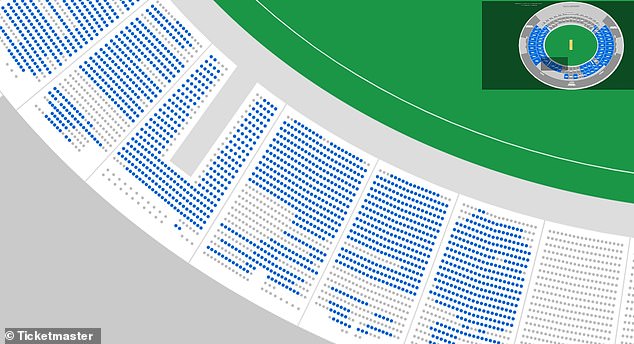 Optus Stadium, which has a capacity of 60,000, still had an alarming amount of tickets available the day prior to the start of the first day of the Perth Test (blue is empty seats, to the far right is a bay closed down due to the sightscreen) 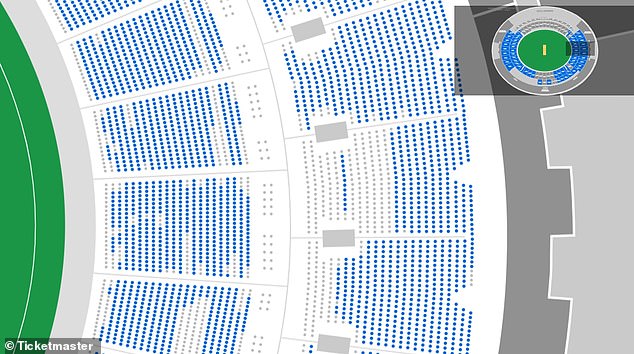 ‘The NRMA Insurance Brisbane Test is always one of the great occasions on the cricket calendar, and the showdown between the Australian and South African pace attacks is going to make this encounter particularly memorable,’ said a statement released by Cricket Australia.

The cheapest ticket for an adult is an inherently reasonable $30, and many bays show just one seat available with 10 days remaining until the first ball is bowled.

So perhaps people in other areas, and in different formats, are voting with their feet against the game’s governing body in Australia – not just the men’s side.