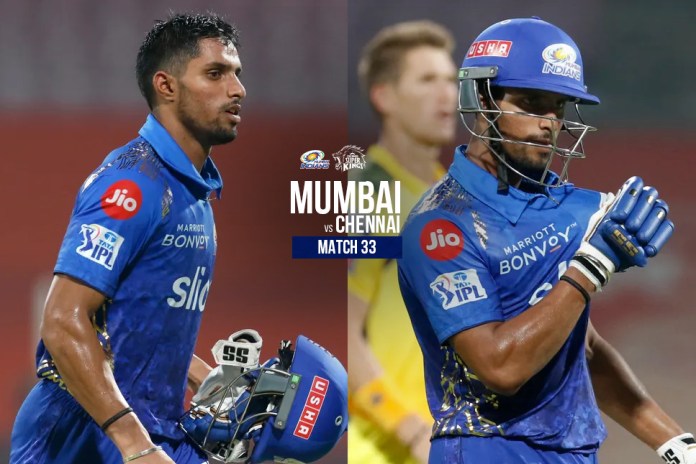 MI vs CSK LIVE: Tilak Verma leads FIGHTBACK against CSK – When odds get stacked, only heroes emerge. One such hero for Mumbai Indians came in the form of Tilak Varma who single-handedly saved MI from a disastrous result and helped them achieve a moderate score of 155 after the end of 20 overs. Tilak Varma played a brilliant knock of 51 runs not out off just 43 balls to encourage a brilliant comeback from the Mumbai outfits in the much anticipated El Classico of IPL 2022. Follow IPL 2022 Live Updates on InsideSport.IN

The most successful club in the history of the IPL had a disastrous start as their three top-order batters were sent packing within the first three overs of the game. Both Rohit Sharma and Ishan Kishan scored ducks while Dewald Brevis scored a mere 4-run inning. Coming to bat at no. 5, middle-order batter Tilak Varma had a shaky start.

Also Read: IPL 2022: Virat Kohli floors everyone by yet again donning a turban for a brand new Livspace advertisement

#tilakvarma has been the most promising youngster for me this season so far
Not only because of his ability to score quick but also his matured approach according to the situation while batting
He knows when to attack and when to rotate the strike#MIvCSK pic.twitter.com/G9M8yp9qaF

Varma could have well been the fourth victim of Mahesh Chowdhury but Dwayne Bravo gifted the young batter a lifeline as the veteran all-rounder dropped a simple catch in the slip. With a lesson learned, Verma went on to play a sensible inning as he took Mumbai Indians out from deep waters to help his team register a respectable score of 155 runs.

After a wonderful half-century, Varma remained not out as he went on to build some important partnerships with Hrithik Shokeen and Jaydev Unadkat  His 43-ball innings consisted of 3 fours and 2 huge sixes.