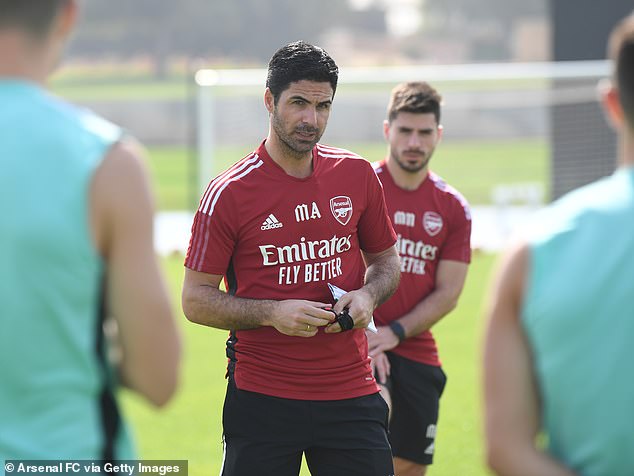 You can’t imagine Mikel Arteta or Antonio Conte will reflect on their respective January transfer windows with much positivity.

Late on Monday night, Arsenal’s worst fears had become a very expensive reality while Tottenham were just happy to have signed two Juventus fringe players after being snubbed twice in the space of 24 hours last week.

Let’s start with Arsenal: they wanted this to be the Dusan Vlahovic window – instead it will forever be remembered as the month they let Pierre-Emerick Aubameyang leave for nothing.

Truth be told, the Gunners knew the very public fall-out between Arteta and star striker Aubameyang would hit them in the pocket – as was outlined in this newspaper on December 16.

But quite how much it cost them surpassed even their own anxious predictions.

Aubameyang – their £350,000 per week centre forward – was en route to Barcelona on a free transfer on deadline day.

Arteta’s decision to ostracise Aubameyang had played into Barca’s hands.

In normal circumstances, Aubameyang – with 18 months left on his contract – would be worth upwards of £40million. It’s hard to argue that the numbers add up for Arsenal.

They will point towards the fact they are saving just over £27million in wages as justification behind their decision.

Similarly, Arteta will say Aubameyang’s departure is crucial to maintaining squad harmony. It’s hard to put a price on that.

But that is unlikely to satisfy those in charge of the Emirates coffers, who would have expected at least some return on a striker they signed for £56million in 2018.

As revealed by Sportsmail last month, Arsenal had received an offer from Saudi Arabian club Al Hilal, who were willing to take Aubameyang on loan until the summer, take on all of his wages and then sign the striker – for a set fee – at the end of the season. 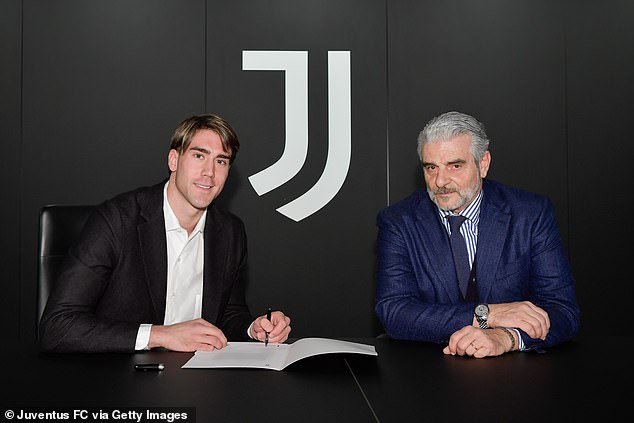 The Gunners were desperate to sign Dusan Vlahovic, who opted to join Italian giants Juventus 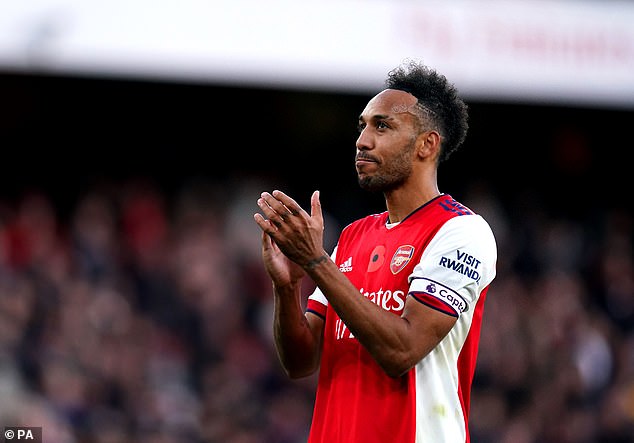 Fair play to the 32-year-old, he wanted to remain playing at the top level. But that hasn’t made losing Aubameyang for gratis any less painful for the Gunners.

Would Arsenal have got a better deal had the club’s dirty linen not be aired for the world to see? No guarantees, but you’d imagine so – at least that is what certain figures think behind the scenes.

Whether it’s the right call will come out in the wash, of course. On the pitch Arsenal look worryingly short at centre forward. 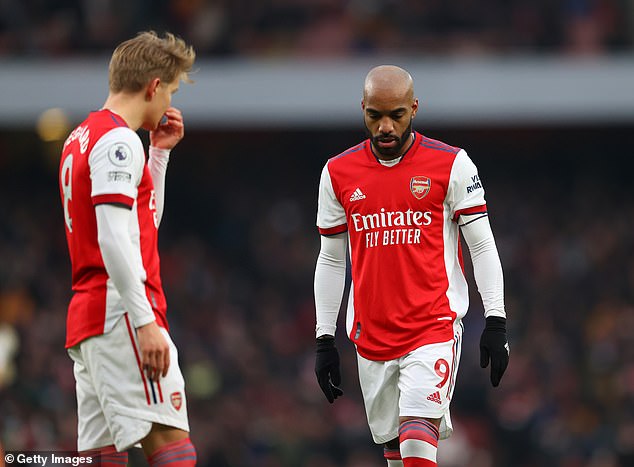 Only Alexandre Lacazette and Eddie Nketiah are accustomed to playing through the middle within the current squad.

Both are out of contract in the summer and have scored two Premier League goals from open play between them so far this season.

That has to be concern. They also look short back at right-back following the departures of Ainsley Maitland-Niles to Roma and Calum Chambers to Aston Villa.

But it is in attack where the real concerns lie. Had January gone according to plan for Arteta then Vlahovic would be leading the line for his team.

In fact, there are many at Arsenal who believe Vlahovic and his advisors were simply stringing them along to get what the striker really wanted – a move to Juventus.

Vlahovic got his wish, Arsenal – who were also turned down by Alexander Isak – not so much. 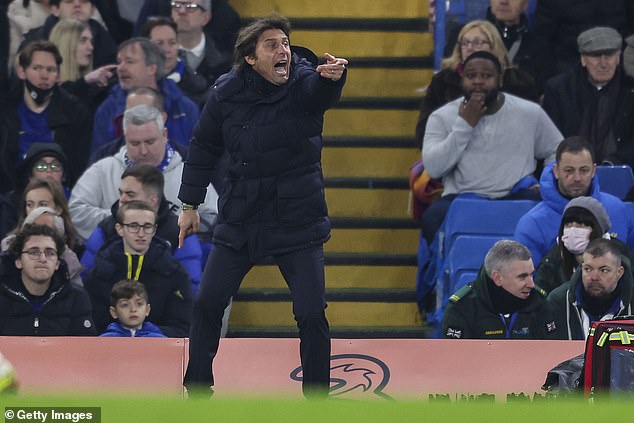 Meanwhile, Antonio Conte will be less than impressed with Tottenham’s January window

Tottenham also had a nibble at Vlahovic but thought better of it after seeing the numbers: a minimum £58million transfer fee, £160,000-per-week after tax in wages and £15million in agent fees.

Instead, they ended up with two players from managing director of football Fabio Paratici’s former club Juventus.

Time will tell if Dejan Kulusevski and Rodrigo Bentancur turn out to be successful acquisitions for Tottenham – but they probably won’t convince an agitated Conte that Spurs share the same sky-high ambition as he does.

Conte wanted Adama Traore, he didn’t get him. The club’s attempts to sign priority target Luis Diaz went the same way after being gazumped by Liverpool. 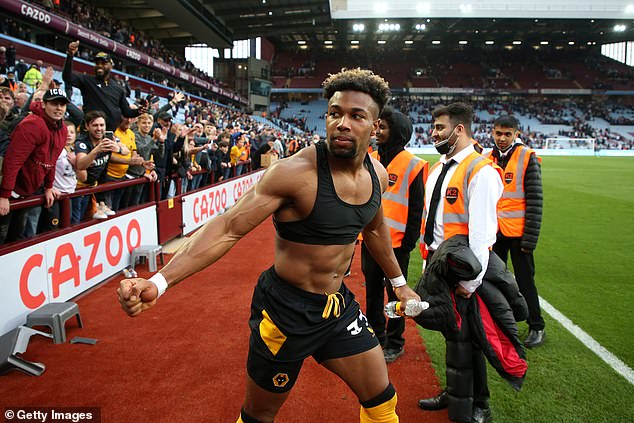 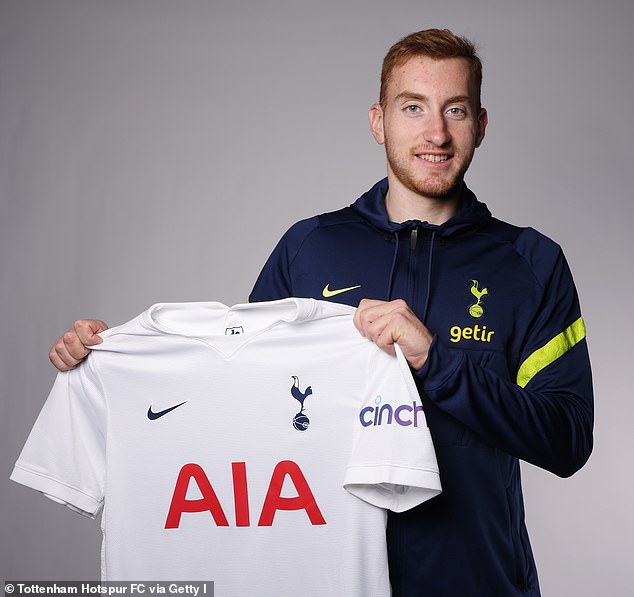 Kulusevski and Bentancur may improve the club’s chances of regaining their Champions League status but for now the jury is out.

Spurs will look to the fact they have managed to offload Dele Alli, Tanguy Ndombele, Giovani Lo Celso and Bryan Gil as successful pieces of business.

And there is a lot to be said for that; clearing the decks for a proper tilt at the summer transfer window is a clever – albeit risky – strategy.

Having offloaded Aubameyang, Arsenal will concur.

But of the four Spurs players to leave, only Alli has left on a permanent deal – there are no guarantees Ndombele, Lo Celso and Gil will leave ahead of next season.

And – most glaringly of all – Tottenham are still without a recognised centre-forward to back up Harry Kane.

You can only wonder how long Conte is prepared to put up with this for.