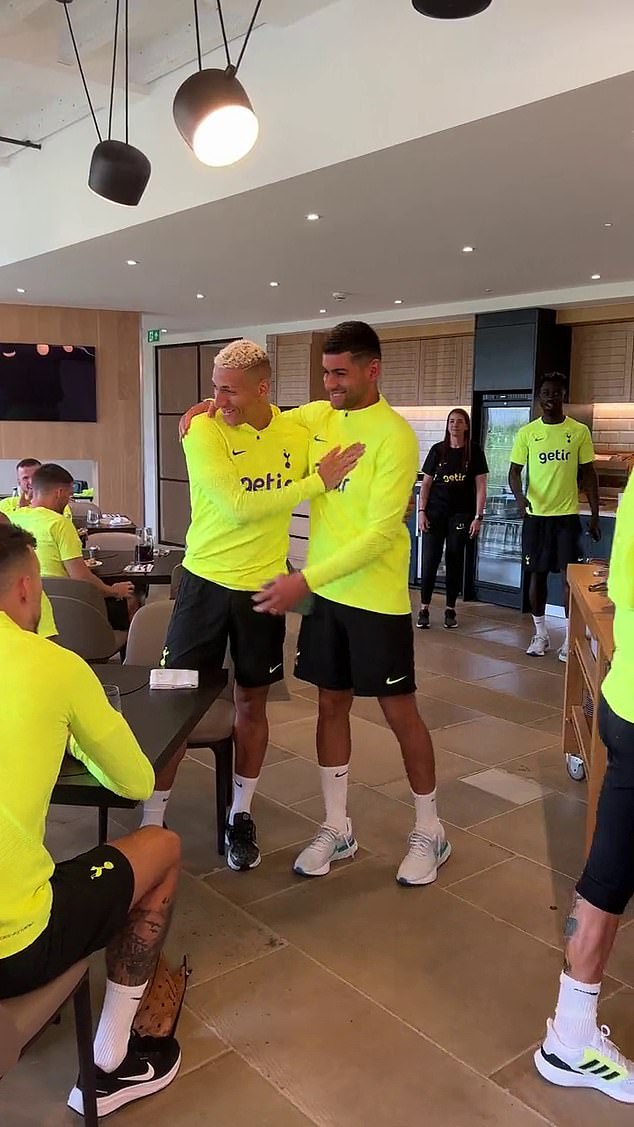 Best of frenemies! Richarlison finally meets new Tottenham team-mate Cristian Romero for the first time since the Brazilian’s £60m move as Spurs players cheer the duo after their brutal battles as opponents in the past

Richarlison and Cristian Romero have finally met each other following the Brazilian’s move to Tottenham after a few lively battles between the pair while he was still at Everton.

The 25-year-old completed the move to north London for an initial fee of £50million which could rise to a club record £60m following add-ons after he signed a five-year deal with Spurs.

Given the tense history between Richarlison and Romero, fans had been eagerly anticipating their first meeting as team-mates, speculating what the reaction would be.

The club have finally provided an answer as they released a video of the pair in the Hotspur Way canteen with the caption: ‘*everyone liked that*’

In the clip, Richarlison can be seen sitting on a table with fellow Brazilian Lucas Moura, before getting up to shake Giovani Lo Celso’s hand after the midfielder comes over to introduce himself.

The Argentine is closely followed by Romero with a smile on his face who also shakes Richarlison’s hand before embracing him.

Huge cheers go up in the canteen with Moura and Eric Dier, sat on the table behind, clapping and laughing at the greeting. 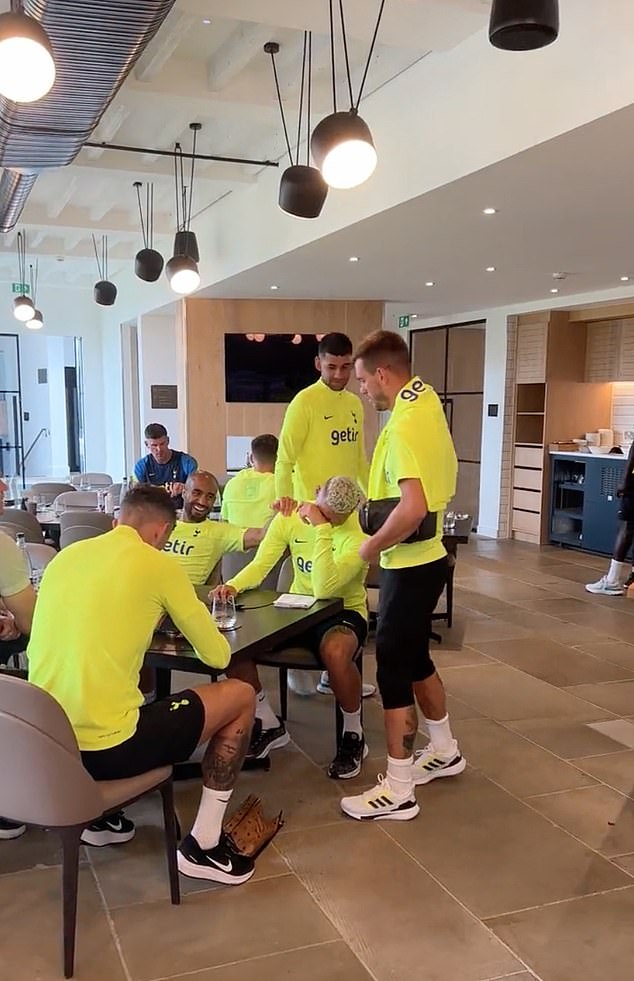 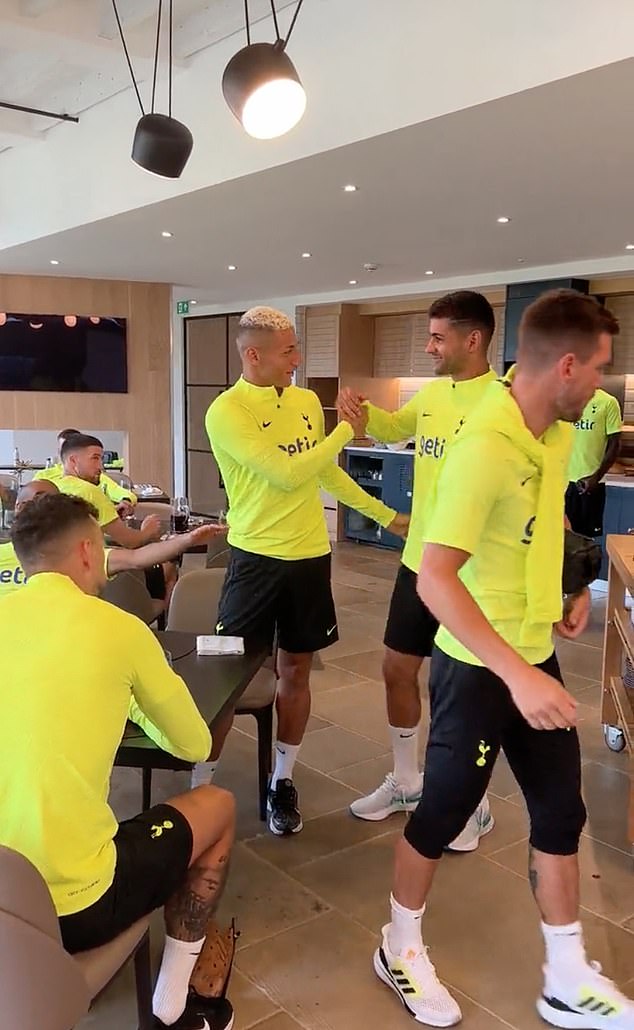 Both Romero and Richarlison appear to find the exchange amusing as they share a laugh before sitting down.

Last season, the pair had clashed at Goodison Park in November during the first-half of the top-flight game before going head-to-head after the break when Richarlison called for a penalty and the Spurs centre back came across to deliver his verdict on the appeal.

Romero then left his mark on his opponent early doors during their next meeting when he flew in on Richarlison with a late tackle that left the Brazil international in a heap on the ground at the Tottenham Hotspur Stadium in March. 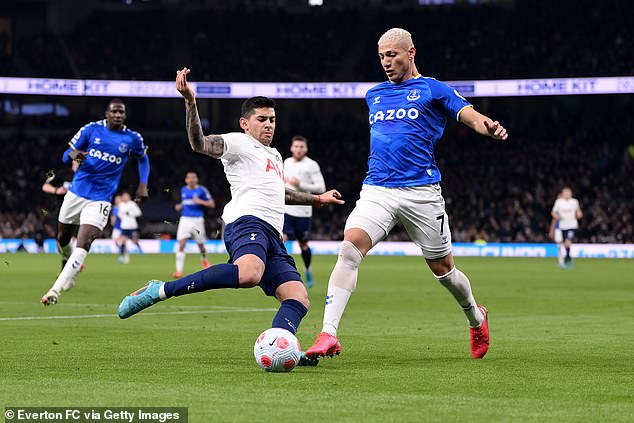 However, the duo appear able to laugh off their past encounters as they team up in Antonio Conte’s side.

Richarlison described his delight at signing for Spurs and his new manager, Conte, who he said was ‘one of the best coaches in the world’. 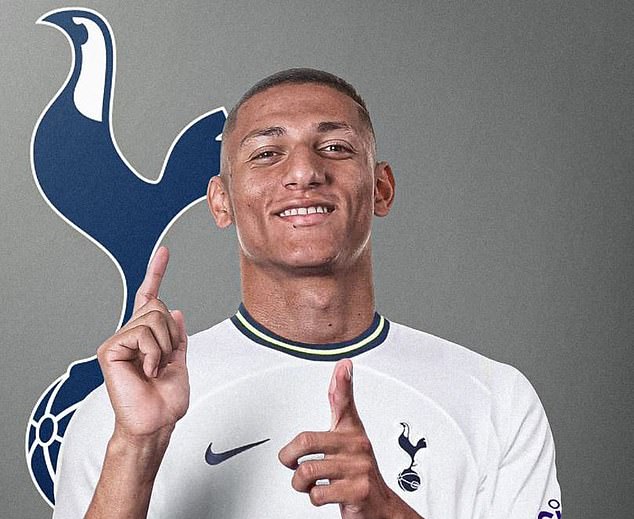 He said: ‘I’m very happy for this moment.

‘I remember when I was in Brazil and came the offer from Tottenham, I couldn’t believe it. And after I signed the contract, even more so. When I arrived here it gave me a chill in my stomach to see my new team-mates and a new home.

‘Now it’s about working with the great coach I have, with great team-mates too. I hope to make history here in this shirt.’