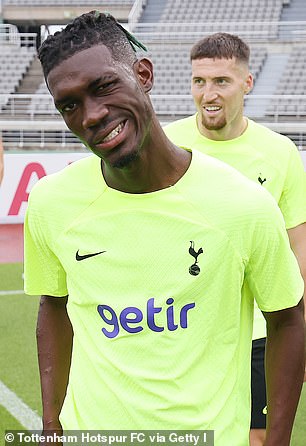 Richarlison made a positive first impression on Antonio Conte — who saw Tottenham score six in Seoul — but positives of another kind are causing problems for the manager.

New signings Yves Bissouma and Fraser Forster are in isolation after returning positive Covid tests, which are mandatory upon entry into South Korea.

They are expected to spend seven days in quarantine in the team hotel and will not be able to fly home on Sunday. ‘We had a problem with Covid,’ said Conte after a 6-3 win against Team K League in front of more than 64,000 in the Korean capital. 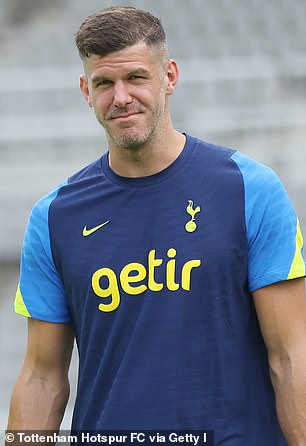 Yves Bissouma (left) and Fraser Forster (right) have both tested positive for COVID while in South Korea, giving Antonio Conte a problem in pre-season

‘The test was positive with Bissouma and Forster, and for this reason they weren’t here.’

Also absent were Ben Davies and Dejan Kulusevski, forced to train instead of play because they missed Monday’s session, and Ivan Perisic is not yet fit.

With Clement Lenglet unable to complete the paperwork in time to travel after signing on loan from Barcelona, it meant Richarlison was the only one of the five summer signings on parade.

He started at centre forward, moved briefly to the left and then on the right before he was replaced after 75 minutes. 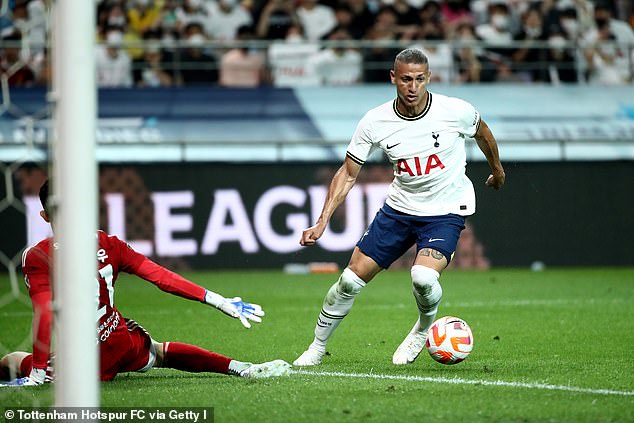 However, Richarlison made a positive first impression on Antonio Conte on Wednesday

‘I’ve seen a lot of positive things about Richy,’ said Conte, who used 22 players over 90 minutes. ‘He can play in all these three positions. He is strong physically and has a good personality.

‘In this period, he is working and we are working on the tactical aspects with him because he has to understand our ideas. At the same time, we have to work on him to be fit. But I’m very happy we signed him.’

Eric Dier opened the scoring against Team K League, who ended the game with 10 men after a red card, Harry Kane came on at half-time, scoring twice and force an own goal. And Son Heung-min came on to score two to the delight of the crowd.

Spurs play again against Sevilla in Suwon on Saturday.