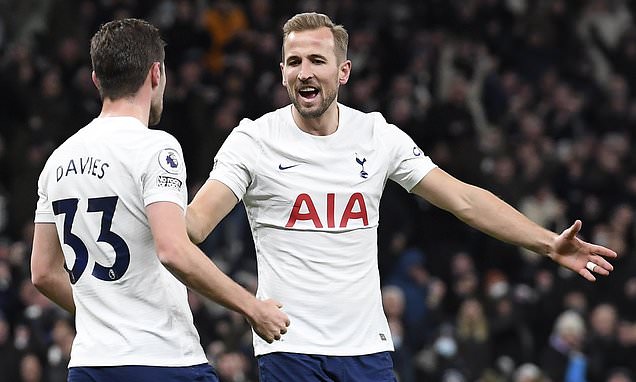 Tottenham will look to make it three Premier League home wins on the trot as they welcome 20th-placed Norwich to north London.

Antonio Conte’s men finally got their chance on Thursday to bounce back from their shock Conference League defeat by NS Mura – after their game at Burnley was suspended due to the snow – and they did so with a 2-0 win against Brentford.

That was Spurs’ second straight home top-flight win since Conte took charge and means their draw against Everton is the only time they have dropped points in the league under the Italian.

Norwich meanwhile dropped to the bottom of the table on goal difference on Saturday following Newcastle’s win against Burnley, having earned a 1-1 draw against the 10-man Magpies in midweek at St James’ Park.

Follow Sportsmail‘s MAX MATHEWS for live Premier League coverage of Tottenham vs Norwich, including build-up, team news and updates from Leeds vs Brentford.

Elsewhere, there is another 2pm kick-off taking place at Old Trafford between Manchester United and Crystal Palace, which Sportsmail‘s ADAM SHERGOLD will keep you up-to-date with.