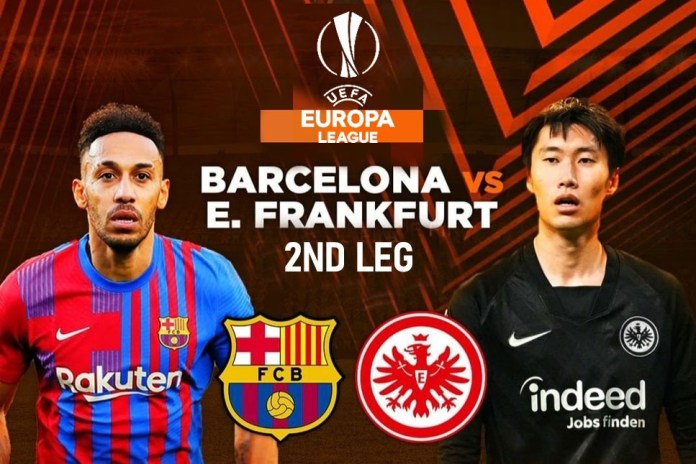 UEFA Europa League Quarterfinal: Barcelona vs Eintracht Frankfurt: The 1st Leg between the two sides was a joy to watch with intense pressing, tackles flying in and most importantly two special goals. Barcelona will be looking to ease past the Bundesliga side but Frankfurt showed its dominance in the 1st Leg and will look to haunt the Camp Nou. Follow InsideSport.IN for the latest sports news and updates.

This week’s menu 🤩 Which four will progress? #UEL pic.twitter.com/KkypsMK3Ew

Barcelona lost Gerard Pique in the first leg, but he is in the squad for this game alongside Sergino Dest, and Xavi’s defensive issues are once again complicated by Sergi Roberto and Samuel Umtiti‘s injuries, as well as Dani Alves‘s ineligibility.

Ansu Fati continues to train with the group but is not expected to be risked just yet, while Memphis Depay is back with the ball at his feet following a thigh injury and will be assessed ahead of this one.

Clement Lenglet should rejoin the defence and Ronald Araujo could continue to fill in at right-back, while Pedri bagged a goal off the bench at the weekend and will also expect to rotate back into the side in place of Nico Gonzalez.

Frankfurt boss Glasner will also be forced into a defensive reshuffle after Tuta was sent off for two bookable offences in the first leg, with Makoto Hasebe the likely candidate to deputise in the back three.

Midfield regular Sow was taken off with a knee ligament strain in the Freiburg loss, although Glasner is still hopeful that he will be able to play some part in midweek; Sebastian Rode should join Kristijan Jakic in the engine room if not.

Christopher Lenz and Diant Ramaj are keeping Sow company in the treatment room, and creative hub Daichi Kamada will hope to force his way back into the XI, but Jens Petter Hauge has given Glasner food for thought with an assist at the weekend.

UEFA Europa League Quarterfinal: When and where to watch Barcelona vs Eintracht Frankfurt Live streaming?

What time does Barcelona vs Eintracht Frankfurt begin? – Time
BAR vs FRA will kick off at 12:30 AM – IST

Where will Barcelona vs Eintracht Frankfurt be played? – Venue
Camp Nou (Barcelona)