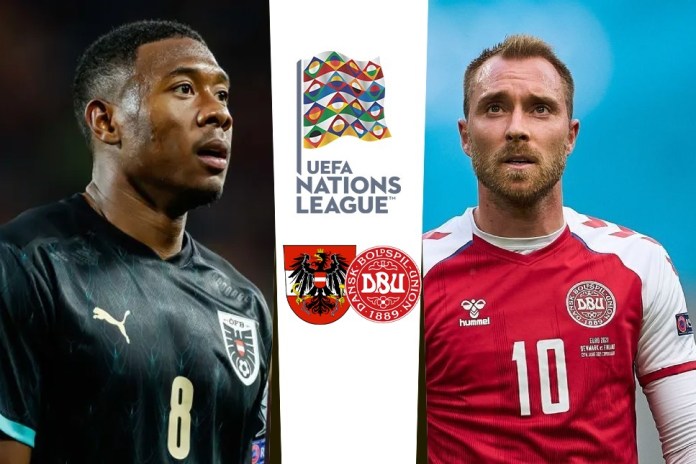 UEFA Nations League 2022/23: Austria vs Denmark LIVE – Austria and Denmark will both be aiming to continue their perfect starts in the 2022-23 UEFA Nations League during their contest at the Ernst-Happel-Stadion in Vienna on Monday night. Ralf Rangnick’s men swept aside Croatia 3-0 on the opening matchday in League A Group 1, while the visitors shocked reigning world champions France 2-1. Follow Austria vs Denmark LIVE updates with InsideSport.IN

Austria’s success over Croatia was all the more impressive given the absence of David Alaba, with the 92-cap defender granted extra time to recover after winning the Champions League final with Real Madrid and dealing with injury problems over the past few weeks.

Fellow centre-back Philipp Lienhart missed out due to a fever and is still uncertain for Monday’s clash, but Rangnick did not pick up any fresh concerns last time out and has some key decisions to make in order to balance team harmony and the packed fixture list.

Gregoritsch, Christoph Baumgartner and Christopher Trimmel all represent competent options off the bench for Austria, while Arnautovic is in line to become only the third male player to make 100 appearances for the nation.

Cornelius’s game-changing introduction for Denmark came after Kasper Dolberg had sustained an apparent shoulder injury early doors, but the Nice man was still able to complete an hour before his withdrawal.

It would certainly not be a surprise to see Cornelius rewarded with a start in this one as Hjulmand remains cautious over Dolberg’s condition, while Brentford’s Christian Norgaard was not involved at all against France due to injury.

As is the case with Rangnick, Hjulmand would ideally like to keep changes to a minimum for Monday’s battle, but Mikkel Damsgaard is pushing to displace Daniel Wass in the wide areas.

Austria vs Denmark LIVE: When, Where, How to watch the live streaming of UEFA Nations League matches?

When will Austria vs Denmark be played? – Date

Austria vs Denmark will be played on 7th June 2022

What time will Austria vs Denmark be played? Time
AUT vs DEN match will kick-off at 12:15 AM IST

Where will Austria vs Denmark be played? – Venue
AUT vs DEN will be played at the Ernst-Happel-Stadion

Who will be the Match Official for Austria vs Denmark? Referee

William Collum will be the referee for the game