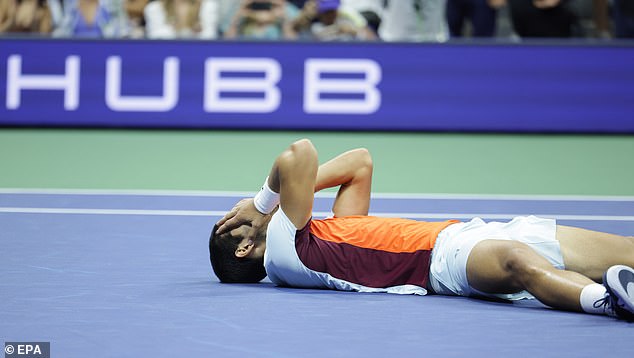 Carlos Alcaraz went from Spanish prince to King of world tennis last night, winning the US Open and topping the rankings in one fell swoop.

Fleet of foot and thunderous of thighs, Alcaraz has gone all the way from number 32 at the start of the year to the pinnacle of the standings. 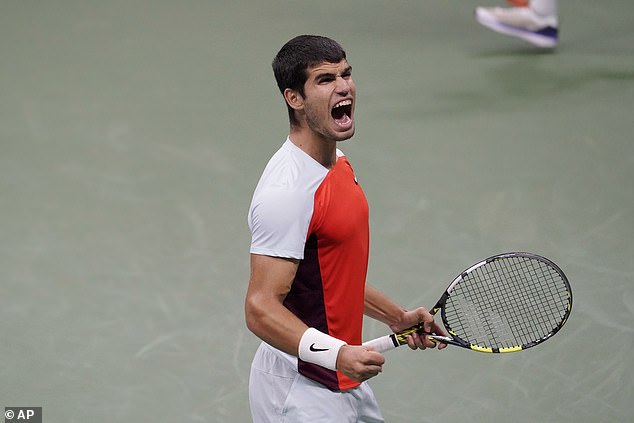 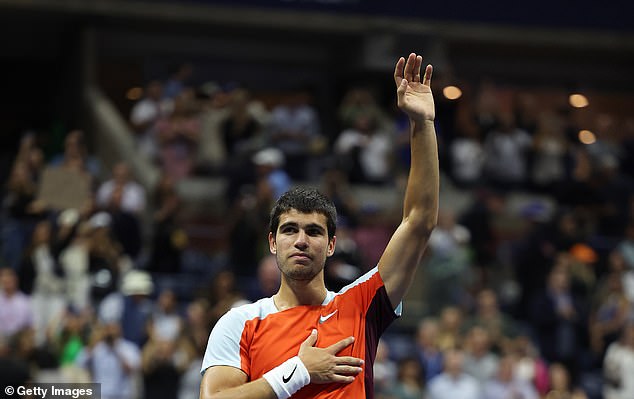 It’s Alcaraz’s first Grand Slam, and many more could be on the way if he keeps it up 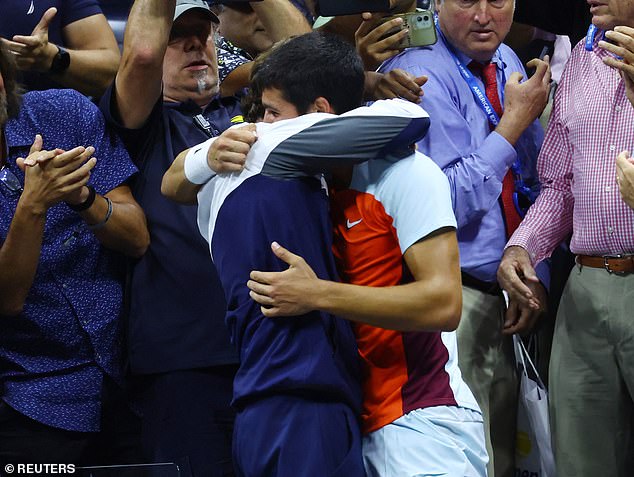 He emulates his coach, Juan Carlos Ferrero, and also Pete Sampras, who won the Open at the same age. Unlike Ferrero, he looks set to occupy the position for far more than eight weeks.

A match full of wonderful all-court rallies pivoted on the tiebreak, when Ruud seemed to flinch with the match at his mercy. A flurry of misses gifted it to Alcaraz, who had started to look physically flat and tired after his previous exertions in the tournament.

There was the odd flap as he served it out, but he closed the match with an unstoppable service winner. 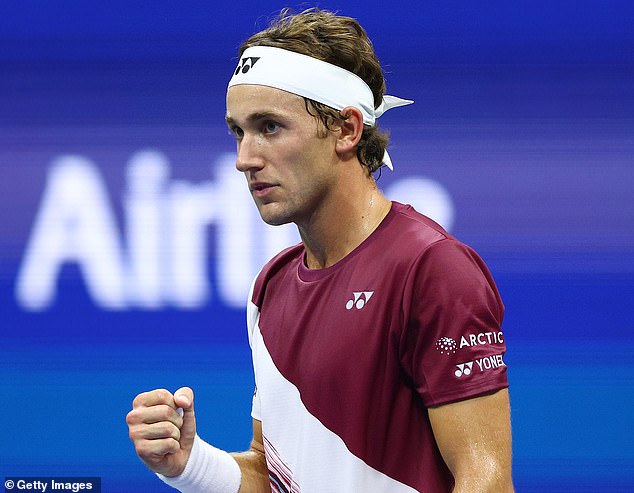 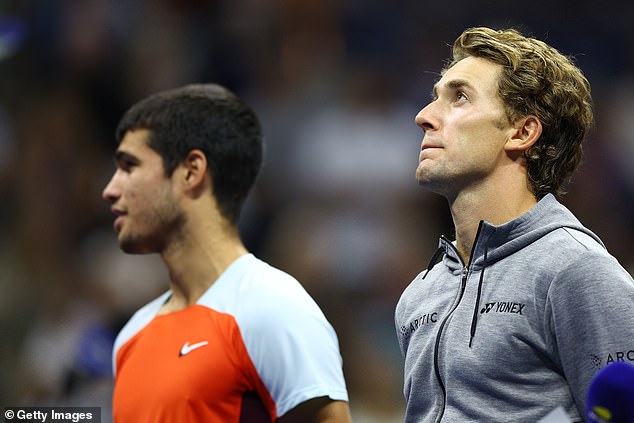 The Norwegian is now No. 2 in the world after reaching finals in New York and France this year

It had not taken long for Ruud to find out that he was very much second favourite among the crowd.

Steady drizzle all day had meant the roof would be closed, and the first impact of that was to trap in the roar that went up when the young Spaniard walked on court.

Not that the Arthur Ashe Stadium was hostile to the polite Norwegian, but clearly there was a desire to see history carved out by the teenager.

Both players were nervous and inclined to make mistakes in the opening stages, with break points created on both sides. It was also obvious that this match was going to feature some sensational retrieving from two of the quickest athletes on the tour.

Alcaraz broke for 2-1 when his deep return forced the Scandanavian to shunt a backhand into the tramlines. 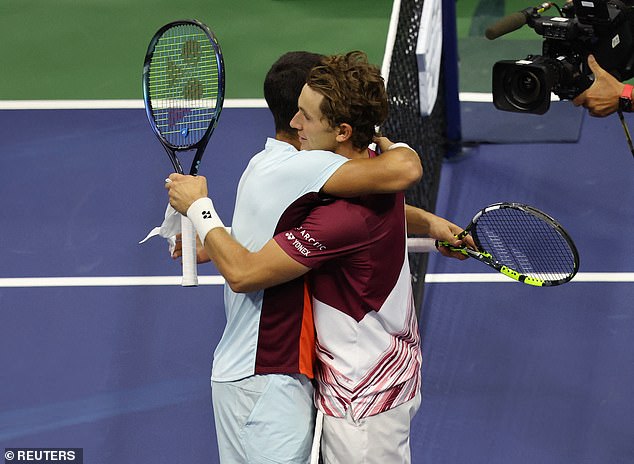 The two exchanged a hug after the hard-fought, three hour and two minute match 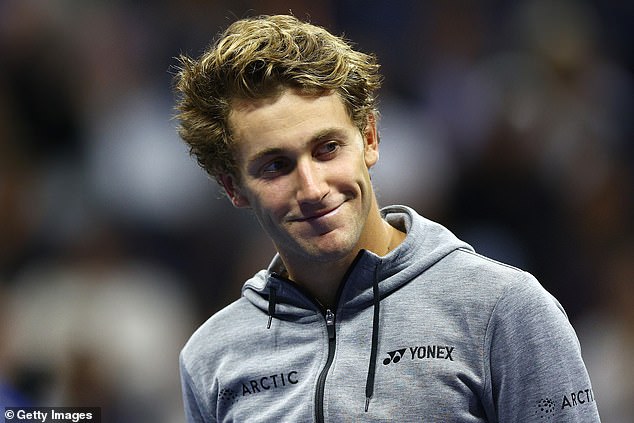 Ruud said that he was happy with his No. 2 ranking but would continue to chase the No. 1 spot 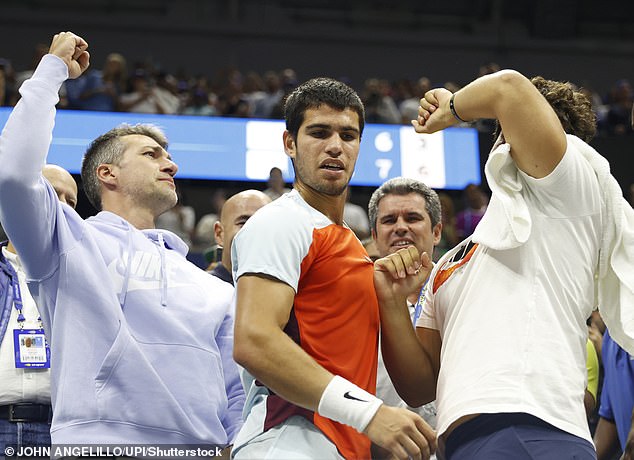 Alcaraz is the youngest world No. 1 in tennis history, and he won’t turn 20 until May

If the Spaniard has a weakness it is that he is still inclined to get tight and hand back leads, but amid some brilliant scurrying he held onto the advantage to claim the first set.

When he did so it was, incredibly, the 65th consecutive match on tour in which he had won at least one set in a match.

The Spaniard lost some consistency in the second and at 2-3 was broken when Ruud scampered in to hit a brilliant backhand lob. He looked in some trouble when broken again to lose the set, with Norwegian’s serve – one of the more underrated shots on the ATP Tour – keeping him steady.

Then came another abrupt change, with a series of backhand errors from Ruud allowing Alcaraz to stem the flow with a break of serve at the start of the third.

Had the teenager taken another opportunity in the third game the set would surely have been his. Instead he allowed his opponent to level when he dumped a backhand in the net, with some of his play suggesting the previous five-setters were finally catching up with him.

This told in dropshots that were unusually lacking in their deft touch, and his feet being less electric than often seen.

Ruud had two set points at 6-5 against serve, one of which was saved with a brilliant stretch volley. The crowd roared its approval at quickfire net exchanges, but the tiebreak was all about the suddenly poor groundstroking from the Norwegian.

Knowing that the match was there for the taking, be blinked. Twice he shanked on the backhand from 1-0 up and a glut of errors saw him present it to a weary but determined opponent, who claimed the next seven points.

That put a spring back in the Spaniard’s step, who forced a critical break at 3-2 when Ruud missed an overhead and then sent a backhand long.

To see how the match unfolded, read the live blog below from Sportsmail’s Jake Nisse.