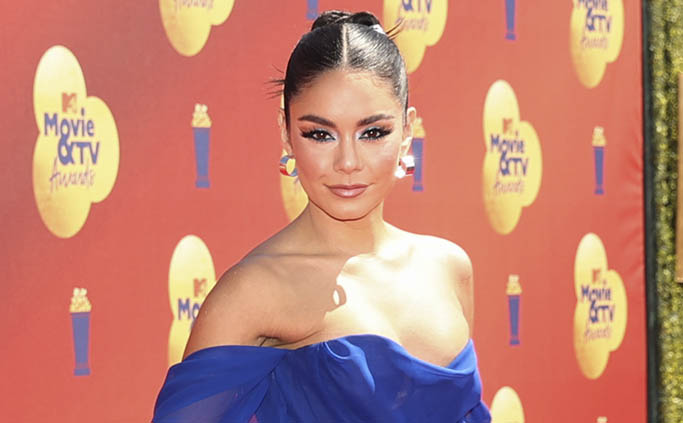 When hosting an award show, your main job is setting the tone for the night — and Vanessa Hudgens has that undoubtedly intimidating responsibility as host of the 2022 MTV Movie & TV Awards. But if her red carpet look for the big event is any indication, she’s well prepared for a night of pure style success.

For the MTV Movie & TV Awards red carpet tonight in Los Angeles, the 33-year-old actress wore a royal blue mini dress by Vera Wang with elegant draping throughout. Though the dress was short in length, it featured an airy train that cascaded down the right side of the look, adding length and movement to the show-stopping ensemble. The bold gown was further stylized with billowing off-the-shoulder sleeves and a draped neckline. Hudgens wore the dress with towering metallic silver platform sandals set on 7-inch heels. The shoes featured simple straps across the foot and ankle.

The style star accessorized the look with mid-size silver cuff earrings and silver statement rings, steering clear of any necklaces. She went for a lash-heavy makeup look with a touch of shimmer and a nude lip, accentuating her eye shape with dark winged liner. To show off the neckline of the dress, Hudgens wore her hair pulled back into an intricate updo that featured a middle part and some silver metal accents.

The MTV Movie & TV Awards on June 6 in Los Angeles honor the year’s best television and film in a fan-voted award ceremony. This year, “Spider-Man: No Way Home” leads the pack with seven nominations, while “Euphoria” is a close second with six nods. Two new categories were also added for the 2022 ceremony: Best Song and “Here for the Hookup.” Hudgens hosts this year’s ceremony, which marks the 30th year of the awards show. As always, winners will go home with a coveted golden popcorn trophy. The main awards show is followed by the second annual MTV Movie & TV Awards: Unscripted, which honors the best of reality TV, talk shows, and documentaries.