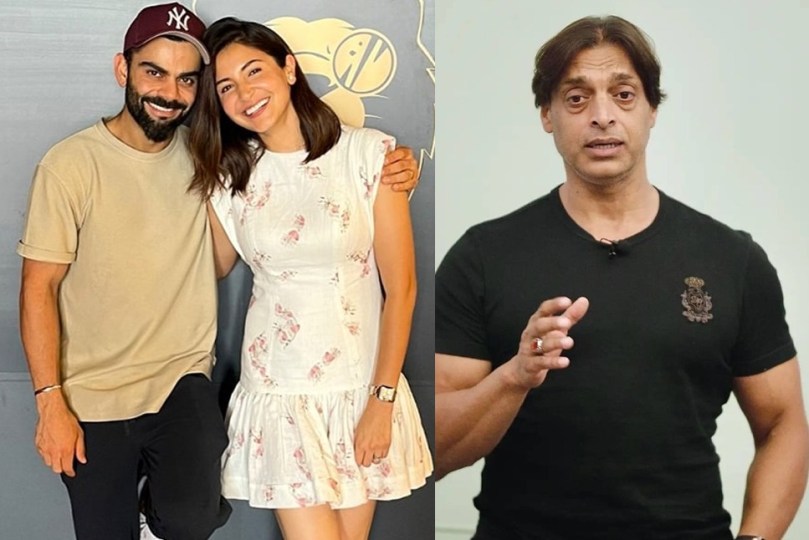 Virat Kohli Anushka Sharma – Shoaid Akhtar on VIRUSHKA: Pakistan speedster Shoaib Akhtar has become biggest fan of Virat Kohli and his wife Anushka Sharma. Akhtar labelled Anushka an “iron lady”, while also describing Kohli as the “man made of steel”. After smashing his 71st century in international cricket, Virat Kohli credited his wife Anushka Sharma for having his back, especially when nothing was going right for the star batter. Akhtar said he is completely bowled over by LOVE and RESPECT both have for each other: Follow Asia Cup 2022 LIVE updates & Indian Cricket LIVE Updates with InsideSport.IN

“Virat Kohli stated in his post-match interview that ‘she’s seen the worst side of me’, vo apni begum ke baare me baat kar rahe the (He was talking about his wife). Hats off to Anushka Sharma, well done! You are an iron lady and he is the man made with steel, Mr. Virat Kohli,” Akhtar said in a video uploaded on his YouTube channel.

Shoaid Akhtar on VIRUSHKA: Kohli, who had not scored a century in nearly three years, reached triple figures against Afghanistan in the ongoing Asia Cup. He slammed an unbeaten 122 off 61 balls, hitting 12 fours and six sixes. Sharing his views on Kohli’s post-match quote on his wife Anushka, former Pakistan pacer Shoaib Akhtar hailed the power couple.

After scoring the ton against Afghanistan, Virat Kohli had said: “And I kissed my ring in the celebration as well. You see me standing here because of all the things that has been put into perspective by one person, who stood by me through all these difficult times – that’s Anushka. This hundred is dedicated to her and for our little daughter Vamika as well.”

India batting legend Sachin Tendulkar holds the record with 100 centuries to his name.

Akhtar further stated that if Kohli manages to equal Tendulkar’s record, he will be remembered as the greatest batter of all-time.

“Congratulations to you, Virat Kohli, you are a man of great nerve. Keep growing and you are a very good person. You always support the truth and that’s why nothing bad will happen to you at the end remember. The next 29 centuries will drain you mentally, but you will always be remembered as the greatest in the history of cricket,” he added.