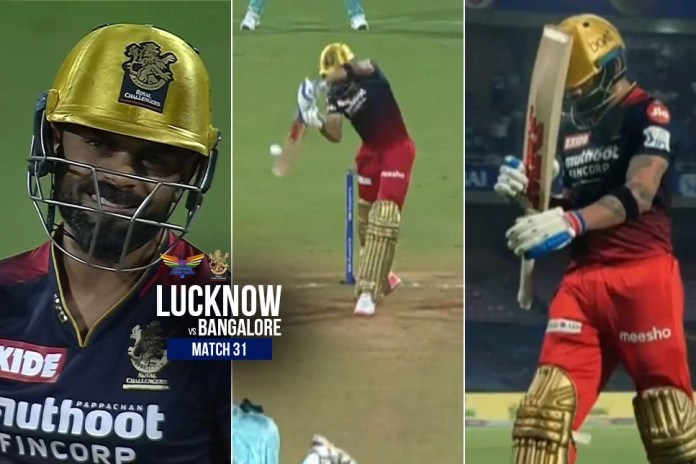 IPL 2022 – Virat Kohli Most Embarassing Century: Former India and Royal Challengers Bangalore skipper Virat Kohli is going through a caree threatening BAD-FORM. Kohli was again out for DUCK against Lucknow Super Giants on Tuesday but in process scored one of the most embarassing century of his career: Follow IPL 2022 LIVE Updates with InsideSport.IN and check RCB beat LSG Highlights

What is Kohli’s Most Embarassing Century?

IPL 2022: Virat Kohli scores MOST EMBARASSING century, now it is 100 matches since former Indian & RCB captain has scored a 100

Virat Kohli Most Embarassing Century: On Tuesday, Kohli came in to bat after RCB had lost the opener, Anuj Rawat, for 4 in the first over.

Kohli went for a first-ball duck in the last delivery of the first over. It was a back-of-length ball outside off and the 33-year-old Delhi batter just pushed it for a simple catch to the fielder at point.

Kolhi is the top-scorer in IPL history so far with 6402 in 214 matches with five centuries and 42 fifties.

He is seventh on the list of batters with more runs (combined, Test, ODI, T20I) in cricket history with 23,650 runs. Sachin Tendulkar leads the list with 34,357 combined runs across all formats.

IPL 2022: Virat Kohli scores MOST EMBARASSING century, now it is 100 matches since former Indian & RCB captain has scored a 100

Virat Kohli’s Last Century – What his poor form has costed him? Overall if it is 100 matches since Virat Kohli got a century.

In international cricket it’s been 71 innings since he scored a last hundred. His last 100 came against Bangladesh as he scored 136 in Kolkata in November 2019.

Since than he has often got starts, but hasn’t been able to convert them into big scores

He relinquished the Test captaincy recently and has been replaced by Rohit Sharma as captain across all formats.

Virat’s lean form is a cause of concern for India, especially in a T20 World Cup year. The ‘Men in Blue’ can’t afford to have a struggling Kohli in Australia later this year.

His latest failure on Tuesday received a lot of attention on social media with many netizens arguing in favour and some against him, talking of the difficulty of scoring centuries in T20 cricket, including IPL.

Kohli incidentally is second on the list of players with most centuries in IPL with five tons, trailing Chris Gayle (6).