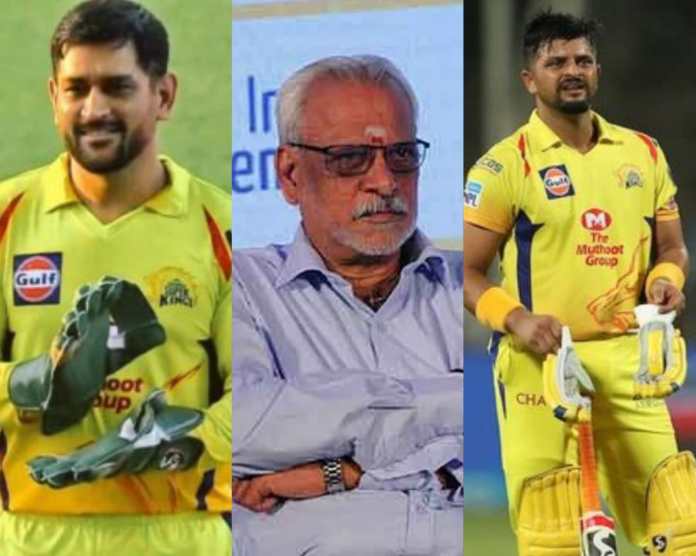 IPL 2022 CSK Squad – Why CSK Snubbed Raina?: Chennai Super Kings (CSK) & other franchises badly snubbed Suresh Raina at the IPL Auction. One Of the most prolific batsmen in the IPL’s history failed to attract a single bidder. Some fans & experts have raised eyebrows on the way CSK & their captain badly snubbed Raina. But CSK’s CEO says Raina wasn’t picked he doesn’t fit in the current team’s composition – Follow IPL 2022 LIVE Updates with InsideSport.IN

“Raina has been one of the most consistent performers for CSK for the last 12 years. Of course, it was very difficult for us, no to have Raina but at the same time, you should also understand that the team composition depends on the form and kind of team which any team would like to have so that’s one of the reasons why we thought he may not fit into this team,” CSK CEO Kasi Viswanath said in a video shared by Chennai Super Kings on their YouTube channel on Monday.

IPL 2022 CSK Squad: Suresh Raina ‘SNUB’ pure cricketing decision or result of fallout with MS Dhoni? CSK CEO & others give their side: Check the INSIDE STORY

Suresh Raina SNUB – Was all well between Dhoni & Raina? Notably, former India batsman Suresh Raina, who had a base price of Rs 2 crore, went unsold in an IPL auction for the first time in the history of the tournament.

CSK ignored him on account of his age & form. But at the same time the defending champion have a number of players, including skipper MS Dhoni, Ambati Rayudu, Dwayne Bravo and Robin Uthappa who all are on the wrong side of the 30’s.

The form of each one of them is questionable – still Raina was the one who was ignored by CSK – WHY?

According to few, the decision by CSK management doesn’t meet the eye & there is something more to it.

“Yes, Raina failed all 12 games he played during IPL 2021 but so did Dhoni & few others. Since the time Raina was sent back or he came back to India from Dubai things have not been normal between Dhoni & him. He was given IPL 2021 but we saw things were not normal between the two. They never mingled around post IPL 2020”, said one of the CSK Source.

The other source closer to CSK management told InsideSport that Raina apparently had lost motivation that’s the reason team decided to let him go at the auction.

“Even in IPL 2021 he completely lacked motivation. He wasn’t his usual committed self. Post IPL as well he hasn’t made attempts to stay fit. This is the reason CSK management gave up on him”, said the source.

On his part, CSK CEO explained that it was dynamics of the auction that they could not retain Raina or even Faf Du Plessis.

“We will miss him, we will miss Faf who has been with us for the last decade, that’s the process and dynamics of the auction,” CSK CEO said in his parting comment.

InsideSport tried reaching out to Raina for his FINAL TAKE on the issue – but the man himself at his moment has decided to stay mum.

Young Indian cricketers dominated the proceedings at the auction, with Ishan Kishan attracting the topmost bid of INR 15.25 Crore which saw him return to MI.

Meanwhile, Deepak Chahar, who returned to CSK for INR 14 Crore, became the most expensive Indian pace bowler to be ever bought at the IPL Auction.

KKR broke the bank for Shreyas Iyer and bought the stylish right-handed batter for INR 12.25 Crore.

Liam Livingstone, Wanindu Hasaranga, Nicholas Pooran, Shardul Thakur and Lockie Ferguson also made merry at the Auction while Avesh Khan became the most expensive uncapped player in the history of the IPL, with INR 10 Crore against his name, courtesy the new IPL entrant LSG.

” I was very Sad once the bidding got over, CSK is like a Family to me “