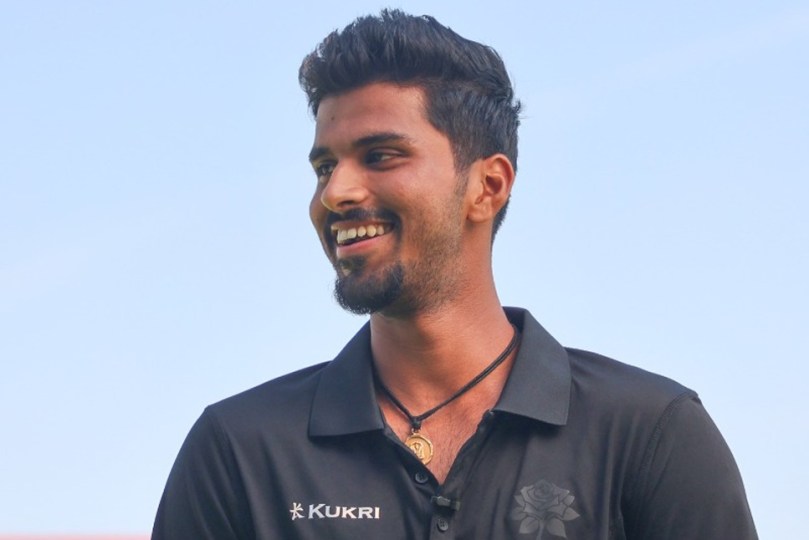 Rob Keogh and Like McManus both scored half-centuries to put the heat back on Lancashire’s bowlers to leave in the game nicely poised going into day too.

Some tight and disciplined bowling from Lancashire’s attack had reduced Northamptonshire to 124 for five in temperatures approaching 40 degrees, Will Williams picking up two scalps.

But Keogh led the counter attack, striking six boundaries as he passed 5,000 career runs in first class cricket. He found a willing partner in McManus and the pair shared a 77-run partnership in 18 overs to take Northamptonshire past 200.

However, Lancashire made further inroads before the close with Washington claiming four wickets for 69. He removed Keogh thanks to a stunning one-handed slip catch from Luke Wells, while Tom Taylor was trapped lbw attempting a reverse sweep.

McManus reached his fourth half-century of the season shortly before the close as Northamptonshire finished on 218 for seven.

Earlier on a day reduced to 72 overs because of the extreme heat, Northamptonshire’s top order failed to capitalise after winning the toss and deciding to bat, despite most batters getting good starts.

New red ball captain Will Young saw off the new ball but fell cheaply for two to Sundar’s second delivery when the batter edged behind off an attempted cut shot.

Ricardo Vasconcelos, who stood down as captain ahead of this game, survived a scare in the first over when he edged behind, but was soon into his work, driving down the ground for four and playing through extra cover for another boundary.

He had moved onto 23 when he survived a strong appeal when Luke Wood got one to nip back. The left-arm pacer got his man in his next over though when Vasconcelos flashed loosely outside off stump and steered the ball straight to second slip. It was a testing, fiery spell either side of lunch from Wood who troubled the batters by pitching the ball up, mixed in with some well-directed short deliveries.

Emilio Gay, fresh from a century at Canterbury last week, made the most of the fast outfield with five boundaries before lunch. He also stepped down the pitch to dispatch Sundar high into the Lynn Wilson Stand.

Northamptonshire went into lunch on 63 for two but scoring slowed considerably after the interval in the face of some disciplined Lancashire bowling which soon reaped rewards when Procter was adjudged lbw to Williams for 19, struck on the pads attempting to work a ball to leg.

Williams picked up a second wicket when Gay (35), who had become becalmed, adding just three runs in an hour’s play after lunch, drove loosely and Rob Jones took a sharp catch at second slip.

Keogh played positively from the outset. He got off the mark with a well-timed clip off his toes for four and although he played and missed consecutive balls from Williams, he was severe on the slow bowlers. He played a perfectly timed backfoot punch for four off Sundar and then smashed two deliveries from Matt Parkinson through extra cover.

He combined with Ryan Rickleton in a stand of 43 but the South African international fell on the stroke of tea for 22 when Sundar rapped him on the pads as he played back in his crease.

McManus was equally aggressive against Parkinson, sweeping him for four and smashing him down the ground for two further boundaries.

Lancashire turned back to seam but Keogh and McManus kept the scoreboard ticking over, taking the ones and twos on offer and reaching the ropes whenever the bowlers strayed in line or length.

Lancashire turned back to the off-spin of Sundar, who duly made the breakthrough to leave Lancashire on top. McManus who struck Luke Wells down the ground for six in the closing overs will be key if Northamptonshire are to try to push on towards 300 in the morning.