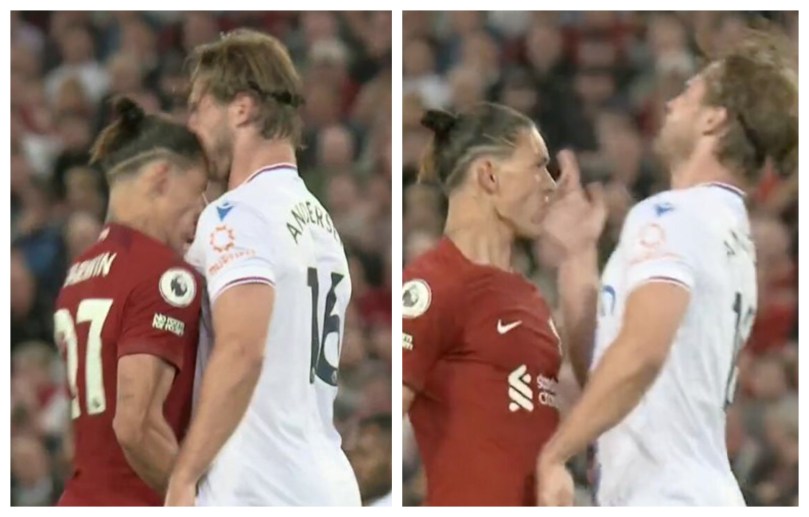 Andersen and Nunez tussled off the ball in the Eagles’ area ten minutes into the second half when the Uruguayan put his head flicked his head back towards his opponent. And then as the ball was cleared, Andersen gave the Liverpool record signing a shove in the back as referee Paul Tierney kept a close eye on the pair.

Then the red mist descended for Nunez as he turned and nutted the Dane with a sudden forehead on his chin in a disgusting act of violence. The fuming forward incredibly squared up to Tierney after the ref brandished the red card.

James Milner, captain for the night, ran over to the scene to try and calm his raging teammate down before he eventually relented and headed down the tunnel in front of a shocked Anfield.

It completed a nightmare home debut after he missed two glorious chances to score in the first half. The first saw him completely miscue a volley well off target. And then he scuffed the ball as it sat up nicely for him – but it bounced against the far post.

Jurgen Klopp blasted Nunez for his moment of madness, which came with the Reds already 1-0 down after Wilfried Zaha’s first-half sucker punch.

Klopp said: “I cannot deny it is a red card. That’s not how you should behave.

“He’s provoked all the time but it’s absolutely not the reaction you want to see.

“The center-halves will do that to him. He’s a handful himself but that’s not the reaction.

“He knows he has let his teammates down.”

And Klopp admitted: “Diaz was unbelievable. Incredible goal and we needed it.”

Nunez, 23, will now be hit with an automatic three-game ban for violent conduct. That means boss Klopp, whose side drew their opener at Fulham, will be without him for Monday’s clash at rivals Manchester United. Nunez was Klopp’s only available central striker last night, with Diogo Jota and Roberto Firmino on a list of ten crocked stars.

Klopp added: “I don’t know how long he will be suspended. We will use it for physical work, not as a punishment but to make him stronger.

“It’s of course a red card. Four minutes later, we scored an equalizer, and then it was a massive game from us, with ten men putting in such an effort.

“The real feeling I have is I am proud. Everything in the week went against us, it was crazy. It was like a witch was in the building.

“Putting in such a performance in the circumstances, I am really proud of that.”

Milner added: “He’s going to be disappointed. We’ll rally around him and I’m sure he’ll learn from that.”

“To give Manchester City a four-point start, you’ve got a tough challenge to catch one of the greatest teams the Premier League has seen.”