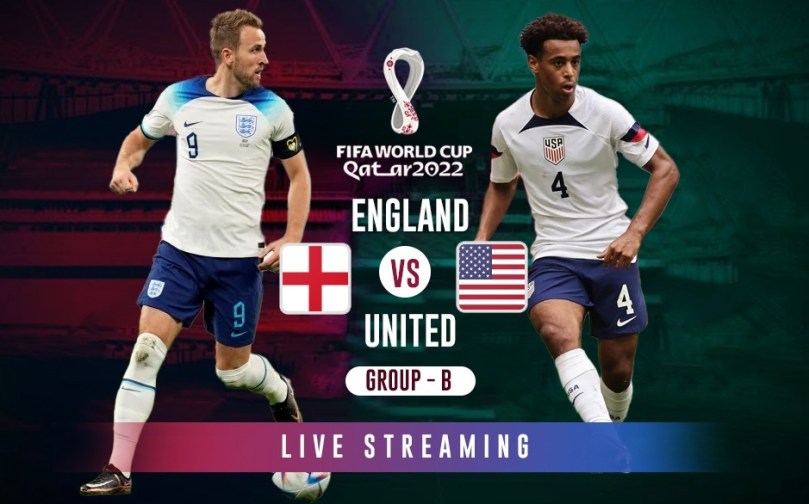 England vs USA LIVE Streaming – FIFA World Cup 2022: England faces USA in their second group stage of the FIFA World Cup. Coming off a 6-2 win over Iran, England will be raring to go against their next opponents. Harry Kane is fit enough to start the game and will pose a major threat to Tyler Adams and his boys. The match will take place at the Al Bayt Stadium on 26th November, 12:30 AM. Watch FIFA WC LIVE Streaming on JioCinema & ENGLAND USA LIVE Broadcast on Sports18

England faced some injury concerns during their 6-2 win over Iran. Harry Maguire and Harry Kane were replaced in the second half. However, there is good news as both the players haven’t suffered any major injuries and are fit to play against the USA. Gareth Southgate won’t tinker with his formation and a similar squad as that against Iran is likely to be expected.

Harry Maguire who was dazed in the previous game, is fit to start alongside John Stone in defense. Kyle Walker is fit to start, but Kieran Tripper is likely to get the nod ahead of Walker after his exploits against Iran. James Maddison is still nursing his groin injury and therefore Bellingham, Mount and Rice will form the trio at midfield. Up front, Saka and Sterling will look to continue their good form while Harry Kane, now fit will lead the English charge.

Plenty to build on ahead of Friday 💪

Weston McKennie and Yunus Musah were slightly injured in their draw against Wales. However, the midfield duo will retain their spot in the playing XI against the three lions. Skipper Tyler Adams will partner the duo in the 3-man midfield. USA is likely to opt for the front three of Timothy Weah, Josh Sargent, and Christian Pulisic.

Talented youngster Giovanni Reyna will fancy his chance in the USA squad as they take on the heavyweights. Brendan Aaronson and Cameron Carter-Vickers came on as a substitute against Wales and is likely to follow the drill against England.

When will England vs USA match take place?

Where will England vs USA LIVE Broadcast Take place?

England vs USA LIVE Broadcast will be done at Sports18 Networks.

Where will England vs USA LIVE Streaming Take place?

England vs USA LIVE Streaming will be done at JioCinema