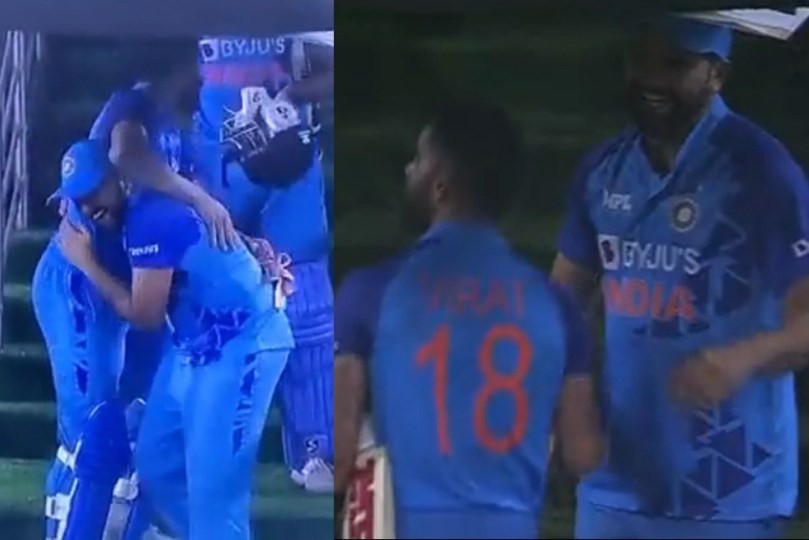 Rohit-Virat Friendship: IND vs AUS 3rd T20: There might be reports of clashes between two of India’s biggest stars. But Rohit Sharma…

Rohit-Virat Friendship: IND vs AUS 3rd T20: There might be reports of clashes between two of India’s biggest stars. But Rohit Sharma and Virat Kohli are two of the best pals behind the curtains. It was on full display during the 3rd T20 against Australia in Hyderabad. Virat Kohli was returning from the field having scored a brilliant 63 off 48. Rohit who was at the dug out, went up to him and pat him on the back. Follow T20 World Cup LIVE & IND vs SA LIVE Updates on InsideSport.IN.

The two then enjoyed the rest of the match together sitting on a staircase as friends do. It was a precious moment that the camera crew captured and went viral on social media. With the two on good terms, the two will play key role in India’s T20 World Cup 2022 campaign.

There were rumours of a possible rift between Rohit Sharma and Virat Kohli. But both publically dismissed the rumours.

What Virat Kohli said: “There is no problem between me and Rohit Sharma. I have been clarifying for the past two years and I am tired now. I want to also say one thing that none of my actions or decisions will be to take the team down. My responsibility is to push the team in the right direction. Rohit is a very able captain and tactically very sound. Along with Rahul bhai, who is a great man manager. They will get my 100 percent support in ODIs and T20Is,” Virat Kohli said of the rift.

What Rohit Sharma said: “Noise will be around as long as we’re playing. People look up to us, everybody watches us. As players, as individuals, we know what we need to focus on. Outside noise doesn’t bother the dressing room,” Rohit Sharma said.

As for the match, blistering knocks by Virat Kohli, Suryakumar Yadav and a late cameo of 25 run off 16 balls by Hardik Pandya took India to a six-wicket win against Australia.

Suryakumar smashed 69 off 66 balls while Kohli scored 63 off 48 balls to guide Men in Blue to a thrilling run chase victory. Chasing 187, India got off to the worst start as they lost their opener KL Rahul on Daniel Sams’ delivery. Virat Kohli then came out to bat and handled the charge of the Indian team with skipper Rohit Sharma.

Earlier, Cameron Green smashed 52 off 21 and a late blitz of 54 runs by Tim David guided Australia to post a competitive total of 186/7. For Australia, Cameron Green smash 52 off 21 while a blistering knock of 54 runs by Tim David powered Men in Yellow to a decent total. For India Axar Patel scalped three-wicket while Bhuvneshwar Kumar and Harshal Patel bagged one wicket each.