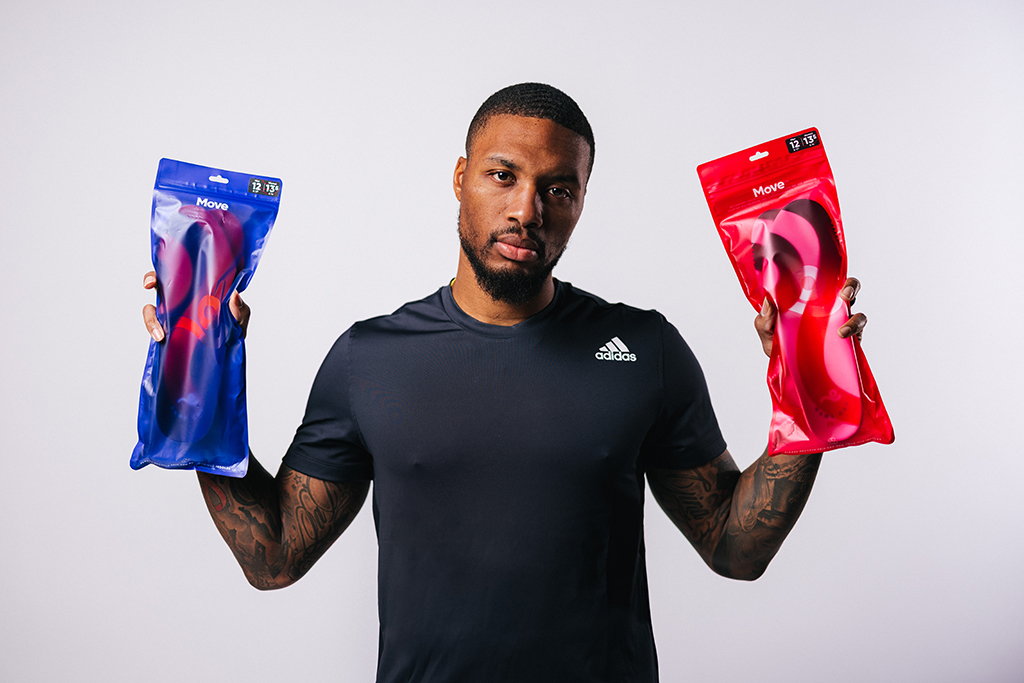 NBA superstar Damian Lillard, who has been mostly durable throughout his pro career, is no stranger to foot injuries, with issues dating back to his college days. However, the solutions available to the Portland Trail Blazers guard have proven to be subpar.

“I broke my foot in college, and when I came back they wanted to give me some type of support in my shoe. They were like, ‘You need to wear these orthotics,’ but they were too stiff for me, they were hard on my feet. That support has always been needed, I just haven’t been able to find anything that worked. I’ve been hesitant about them since then,” Lillard told FN. “I also had plantar fasciitis for two years, it was killing me, but I still couldn’t find an orthotic or any type of insole that could help and be comfortable where I didn’t feel like I had a big block in my shoe.”

About two years ago, Lillard was introduced to Move Insoles by Nate Jones, an agent and athlete marketer at Goodwin Sports Management, which is the same company that represents the baller. After hearing the Move mission, Lillard knew the company was one he could get behind.

The six-time NBA All-Star used the product for the first time during training camp for the Tokyo Olympics last summer. After that experience, he kept wearing them during competition.

He continued, “Any basketball player will tell you, the way your feet feel when you step on the court, the way your shoe feels broken in and tight to your foot and you’ve got traction, is the best feeling in the world. When I put these in my shoes, the way it hugged my foot and I still had good range of motion when I was flexing my feet, made a huge difference.”

Impressed with the product, Lillard cofounded Move in early 2020 alongside Jones, as well as entrepreneur Micah Katz, creative consultant Kam Pashai and others. The company’s first product hit the market in late 2021.

Jones, who also serves as co-CEO of Move, said the company has been focused on building its direct-to-consumer channel, and its website — Move.one — has been converting at a rate of more than 5%. Also, Jones said Move has a retail partnership with Foot Locker Inc. through its Champs Homefield banner, which he hopes to expand soon.

Jones believes Moves has what it takes to win over the insole and orthotics market, which he described as underserved.

“Right now, insoles are mostly developed and marketed for the old and injured and the serious running community. They are not seen as aspirational products and the brands behind them are old and sleepy,” Jones said. “We see insoles as the last frontier of essential products that most pro athletes believe in, but haven’t been marketed correctly.”

Financially, Jones said he believes Move could one day become a $1 billion-plus company. The company will get there, Jones said, by taking share from current leaders in the space while expanding the market by targeting youth athletes and their families.

“When I was a kid, we would go to the rec [center] or go to the park, play and go home. When I was growing up, you had your one team, you had practice, you go to your tournaments,” Lillard said. “Now, these kids are 6 years old, 7 years old, with trainers full time, before school, after school. They’re playing in AAU tournaments with multiple teams. They’re flying all over the place, playing hundreds of games every summer. They’re playing in pro-ams, they’re going to 24 Hour Fitness and playing pick-up. They’re constantly playing and working out to where there’s going to be more miles and wear and tear on their bodies. The No. 1 thing that’s taking all that pounding is your feet. It’s important to have something that’s catered to the health of their feet.”

Jones added, “We feel this current landscape is ripe for a company focused on educating athletes how to prepare and protect their bodies. We believe we have products that youth athletes will get hooked on once they experience them.”

Although Lillard is the company’s co-founder, he’s not the lone NBA star involved. Chris Paul of the Phoenix Suns is an investor, as well as recently-retired baller Jamal Crawford.

“Your feet are the foundation of your body and when they’re out of alignment it makes you more prone to injury. As a professional athlete one thing that’s most important to players when it comes to their shoes are their insoles.  I’m passionate about taking care of and investing in my body so the thought of getting involved and supporting a company that does just that was very exciting for me,” Paul told FN.

Aside from the pros, the company has tapped a pair of up-and-comers as ambassadors. Jada Williams, who will play college hoops at UCLA, has signed with the brand, as well as Cam Whitmore, who will play at Villanova.

“Jada is a megawatt star, fueled by a love of the game and she inspires so many athletes that follow her on social media. Cam is on his way to one of the top college programs in the country and we are getting to be a part of his journey through all of the high school all-star games and showcase events,” Jones said.

“Because of social media being as powerful as it is, some of these younger athletes have as much of a following as professional athletes. They’re more well-known and well-liked, and kids look up to them because they’re like these are kids that have what we want,” Lillard said. “When I was growing up, you looked at the rankings and everybody knew Jrue Holiday or Brandon Jennings was because they were at the top of our class and we saw them on YouTube. Today, it’s similar to that but times 100 because they’re following them on social media, they’re seeing what every day looks like for them so they’re going to have that influence over the younger crowd. They’re not always going to be influenced by us as NBA stars.”