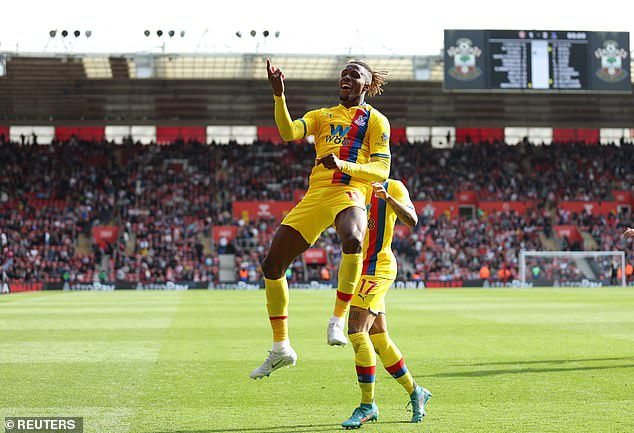 Leeds kicked and wound up Wilfried Zaha and Southampton felt the backlash.

Accused of going to ground too easily by Leeds midfielder Kalvin Phillips following Monday’s meeting, Crystal Palace manager Patrick Vieira was forced to start Zaha on the bench against Southampton.

‘For someone who dives so much, he has an awful lot of bruises on his ankles,’ Vieira explained pre-match.

Wilfried Zaha proved to be the match-winner, scoring the game’s decisive goal in added time 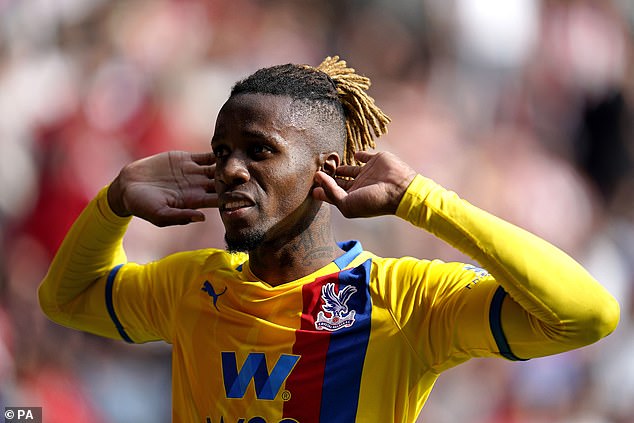 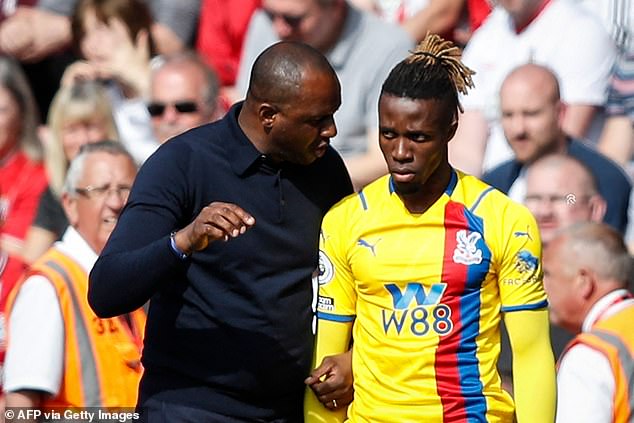 The half hour he ended up handing Zaha was more than enough time for Crystal Palace’s star man to produce the game’s decisive moment.

It came just after four minutes of injury time were announced, Zaha cleverly rolling away from Southampton centre-back Jan Bednarek and firing a low shot from the edge of the box into the net via the inside of Fraser Forster’s post.

Vieira enjoyed that goal as much as any other his team have scored, setting off down the touchline in celebration after seeing his substitution pay off handsomely.

Zaha would have taken extra satisfaction from condemning Southampton to defeat too.

He was jeered onto the pitch at St Mary’s, where they have never forgotten his spat a few years ago with captain James Ward-Prowse, but silenced those with his last-gasp strike.

Zaha’s goal was a big one for Palace, earning them a first victory in five, first come-from-behind win in the league this season and taking him to a career-best 12 league goals for the campaign.

Vieira said: ‘He holds the ball, he’s really strong and he’s got this kind of desire to score the goals. He took the chance and this is really good.

‘I’m not worried about who that [criticism of Zaha] came from. Wilfried is a goalscorer, a fighter and he stays strong on his feet. 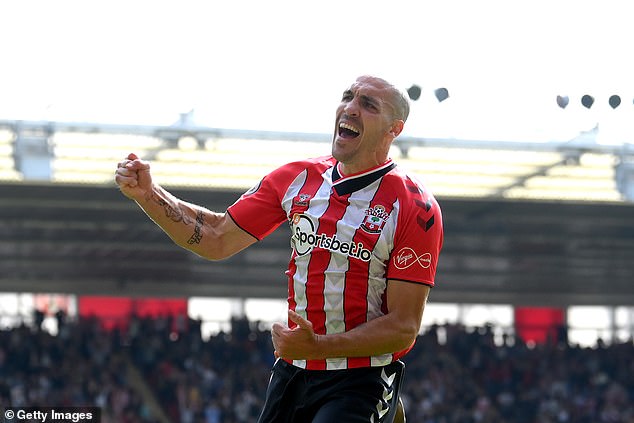 ‘The game against Leeds was in our legs, especially Wilfried’s and the plan was for him to come on and I think it’s important for players to understand that we are a team and everyone has an important role to play.’

Before Zaha entered the fray, Ebere Eze was one of the players in Palace yellow who stepped up in the absence of their talisman.

A week short of a year since his previous goal, Eze cancelled out Oriol Romeu’s early header to draw Palace level his first strike since his recovery from a serious Achilles injury.

Eze was stopped in his tracks last season at the cruellest of times, on the day he received a text message informing him he was in England’s provisional squad ahead for the Euros.

It has been a long way back and patience has been required since his return to fitness as he has not walked straight back into the Palace side having made his first appearance in November. 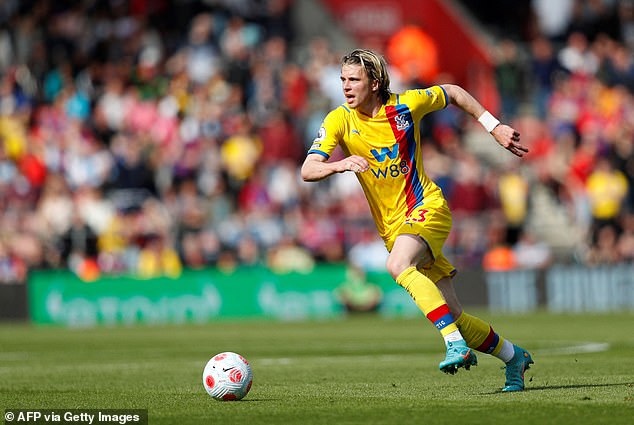 Vieira said: ‘It was a long journey for Ebs and I’m really pleased for him because being out for 7 months is really challenging. He is a player who really loves football. He went through some difficult periods where there was a lot of frustration not to play.

A Palace turnaround was deserved but also required after Romeu headed in a corner from Southampton’s set-piece specialist Ward-Prowse.

But rather than set Southampton on the way to a much-needed victory, Palace grew into and controlled most of the rest of the game.

Conor Gallagher, Jean-Philippe Mateta, Jordan Ayew and James McArthur all had efforts to equalise while Vicente Guaita as only troubled from long-range. 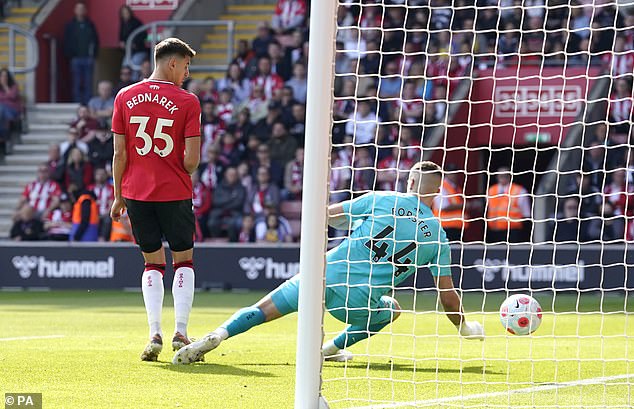 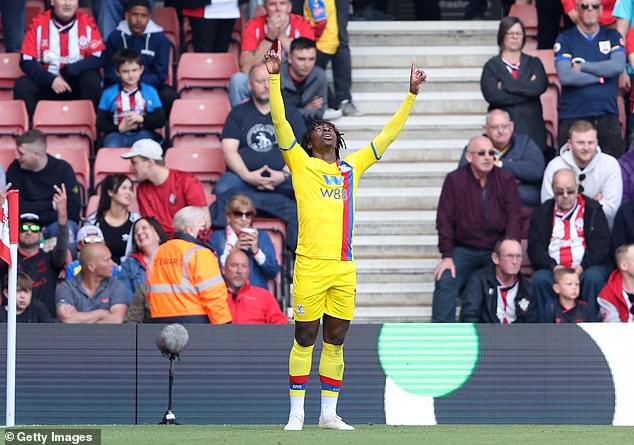 Eze struck on the hour, confidently converting Nathaniel Clyne’s cross though Fraser Forster will no doubt be unhappy to have let the ball squeeze under him.

After that and Gallagher having what appeared to be a decent penalty shout waved away the game appeared to be drifting towards a draw. But then, at the death, up stepped Zaha.

Southampton have now won just one of their last nine games and downbeat manager Ralph Hasenhuttl said: ‘It is very, very hard to take and always when we are in the position to make this next step, we fail and maybe we fail because we are not good enough. 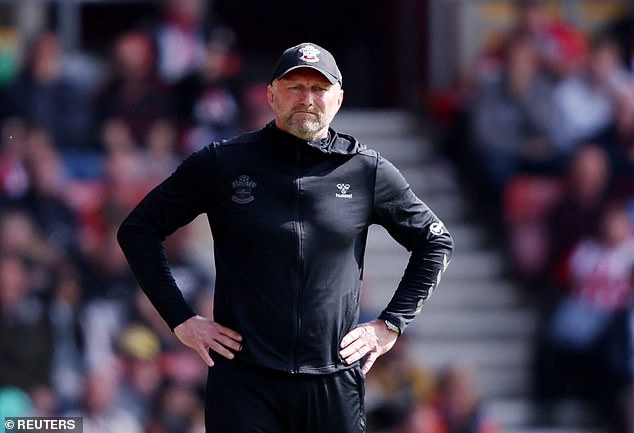