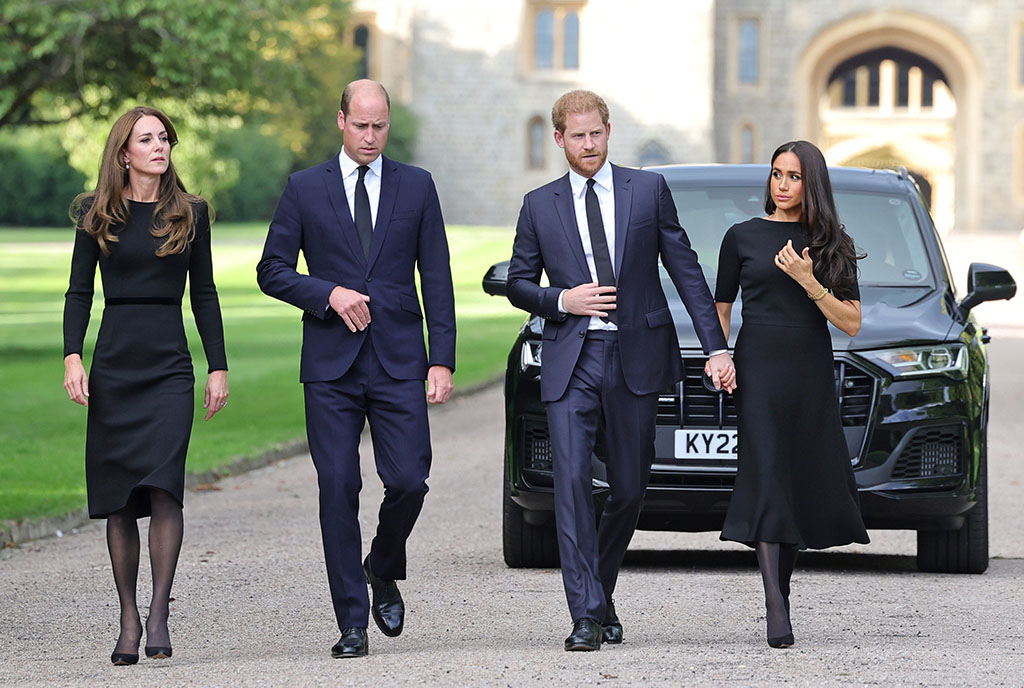 The royal family is united in grief.

Prince William and Kate Middleton, now known as the Prince and Princess of Wales, made an appearance today with Prince Harry and Meghan Markle at Windsor Castle. Together, the couples — who dressed solemnly in black and navy — greeted mourners and viewed floral tributes that were laid in honor of Queen Elizabeth II, who died on Thursday.

The joint appearance was significant given the tensions between the brothers in recent years, and it was a fitting way to honor their beloved grandmother and their father, King Charles III.

Earlier, Prince William released a touching statement about the Queen, noting that while the world lost an “extraordinary leader,” he lost a grandmother. “She was by my side at my happiest moments. And she was by my side during the saddest moments of my life. I knew this day would come, but it will be some time before the reality of life with Grannie will truly feel real.”

William said he was incredibly grateful to have benefited from the Queen’s “wisdom” and “reassurance” into his fifth decade.

Also today, Charles was officially proclaimed as king at the Accession Council. And other members of the royal family, including Princess Anne, Prince Andrew, Prince Edward, gathered at Balmoral Castle in Scotland to attend church and view floral tributes there.

Buckingham Palace said that the Queen’s state funeral will take place on Sept. 19 at 11 a.m. The Queen will lie in state in Westminster Hall for four days to allow the public to pay their respects.

The Queen’s Coffin will travel from Balmoral Castle to Edinburgh tomorrow to arrive at the Palace of Holyrood House, where it will rest until the afternoon of Sept. 12.