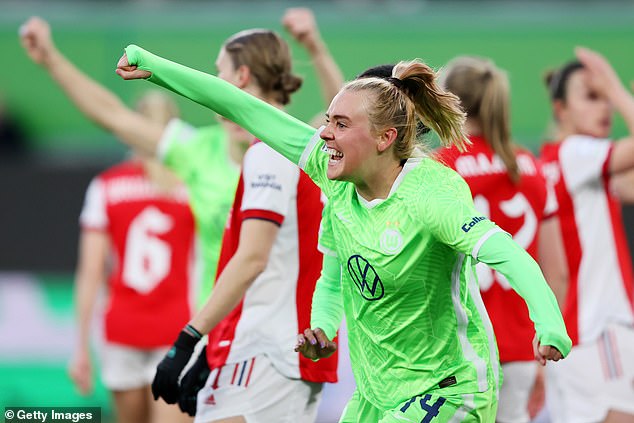 Wolfsburg 2-0 Arsenal (agg 3-1): Heartbreak for Gunners as Jill Roord scores against her former club before Leah Williamson’s own goal sends German side through to Champions League semi-final against Barcelona

Arsenal’s Champions League dream is over after a 2-0 defeat at Wolfsburg saw them crash out at the quarter-final stage.

Lotte Wubben-Moy’s late equaliser at the Emirates last week had put the tie in the balance but similar heroics were not forthcoming in Germany.

A lacklustre first half saw the Gunners fall behind in the ninth minute when former player Jill Roord turned in from close range.

Despite an improved second half performance, Arsenal could not break down a stubborn Wolfsburg defence and an own goal from Leah Williamson in the 73rd minute sealed their fate.

Attention for Jonas Eidevall’s side will now turn back to the Women’s Super League and the task of overhauling Chelsea at the top of the table.

Both WSL sides have now been convincingly beaten by Wolfsburg and it is clear the English teams still have work to do to compete on the European stage.

‘Obviously it’s incredibly disappointing [to go out],’ said Arsenal captain Kim Little. ‘We’ve progressed a lot since the last time we were at this stage against PSG and I think we played a lot better and have played a lot more powerfully in games.

‘I think we still now can see that we’ve got a little bit more to go to be able to compete and win it at these later stages in the Champions League. We all as players and as a team will go away and make sure that we can do all we can so when we come back to being at this stage again, which will happen, that we can go further.’ 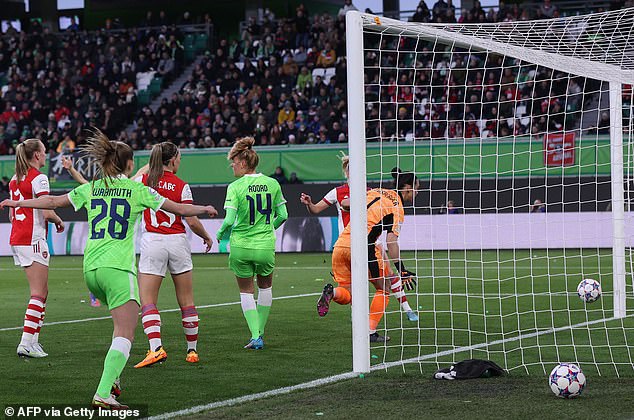 Wolfsburg were on top from the first whistle and it took them just nine minutes to break the deadlock. Arsenal were unable to clear their lines from a corner and after the ball bounced around the box, Roord managed to flick the ball in the net from close range.

Tabea Wassmuth thought she had made it 2-0 five minutes later when she ghosted in at the back-post to finish smartly past Manuela Zinsberger, but the forward was correctly flagged offside.

The Gunners were limited to chances on the break but they failed to test Almuth Schult in the Wolfsburg goal. Zinsberger was much the busier of the two keepers and the Austrian made an important stop to deny Svenja Huth from close range just past the half hour mark. 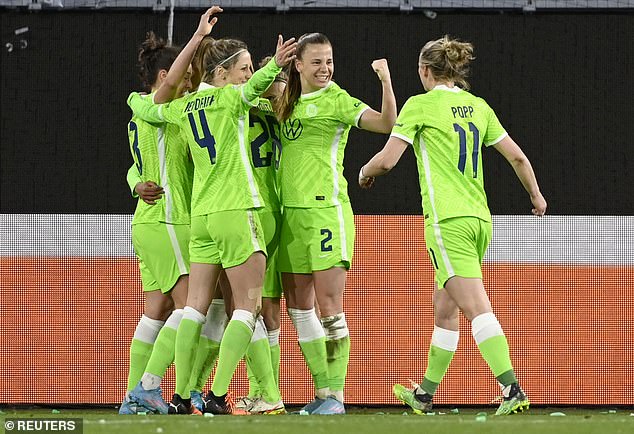 Arsenal began to ask more questions for their opponents at the start of the second half but continued to be frustrated by Wolfburg’s disciplined defence.

A half chance presented itself to Vivianne Miedema when Schult made a mess of Noelle Maritz’s cross, but the forward was unable to send an effort towards goal from a tight angle.

Stina Blackstenius then came close to turning in a Kim Little cross before Wubben-Moy almost managed to get a header on target from the resulting corner. 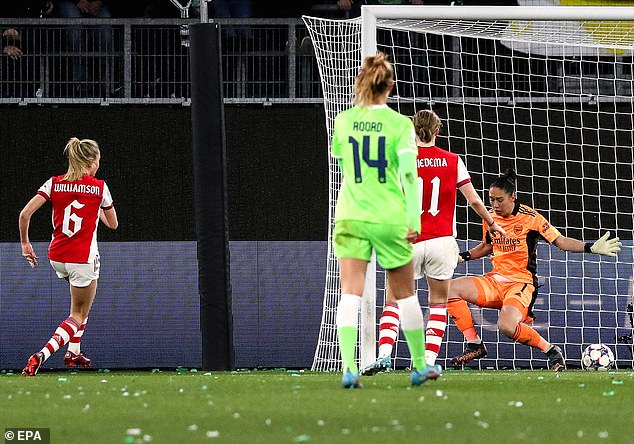 The visitors were unable to make anything of their pressure and a sucker punch came in the 72nd minute when Williamson turned into her own net. The excellent Sveindis Jonsdottir sent in a dangerous cross from the left and Williamson could only stab the ball past her own goalkeeper.

Arsenal had two chances to get a goal back instantly from a corner as Miedema’s header hit the bar before Williamson’s rebound was superbly clawed away by Schult.

Nikita Parris had a late shout for a penalty turned down after being caught by Schult, but there was not enough contact for referee Ivana Projkovska to point to the spot. 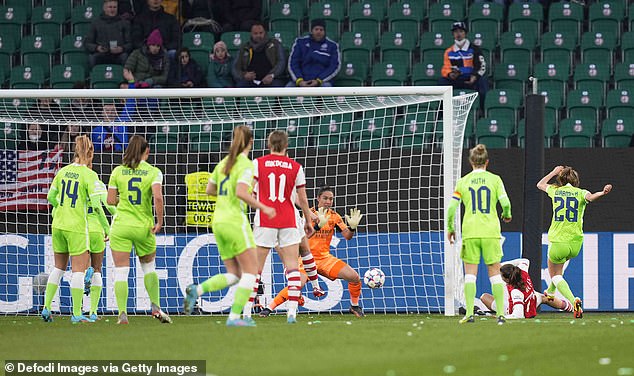