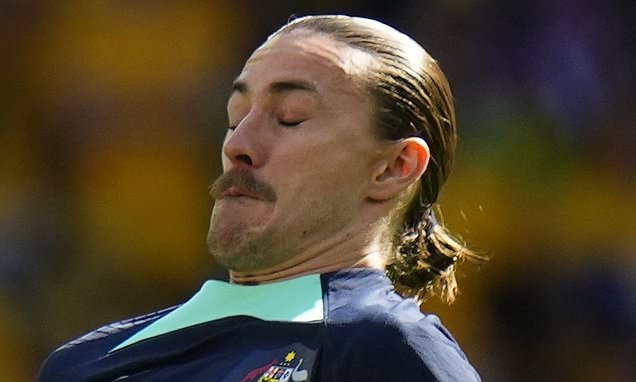 It’s a Socceroos takeover! Football fans dominate Federation Square in Melbourne to throw their support behind Graham Arnold’s side for HUGE World Cup match with Tunisia

There may be a sea of red at the Al-Janoub Stadium in Doha, but Socceroos fans are throwing their support behind their side over 12,000kms away in Melbourne.

Graham Arnold’s side take on Tunisia in a crunch clash in Doha, with anything but a win making qualification for the knockout stages very unlikely for the Australians.

The Al-Janoub Stadium in Al-Wakrah is flooded with with Tunisia fans in a partisan atmosphere for Saturday night’s contest, however while Australia fans may not be there in person, they are still very much backing their team.

Hundreds of fans descended on Federation Square in Melbourne to watch the game on the big screen, with some supporters letting off flares and jumping around in a party atmosphere.