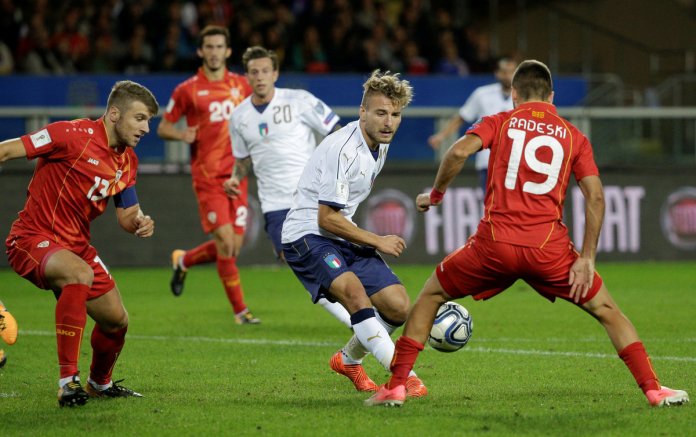 Italy vs North Macedonia LIVE: World Cup Playoffs 2022 – The Azzurri are clinging on to their last hope of making it to the World Cup 2022 as they find themselves in the playoffs and if they win against North Macedonia they will face either Portugal or Turkey on 29th March. Despite having recent success by winning the Euro 2020, Italy will want to be the present in the World Cup having been knocked out in the 2018 edition. Stay updated with the latest team news, predicted lineups, H2H and live streaming/live telecast details. Follow InsideSport.IN for the World Cup news and updates.

North Macedonia’s only previous visit to Italian turf saw them hold the Azzurri to a 1-1 draw during qualification for the 2018 World Cup, but they previously lost 3-2 to the reigning continental champions on their own turf as they endeavour to inflict more World Cup misery on Mancini’s men.

Which teams are you backing to make it out of #WCQ2022 European play-offs? 👀#WCQ #SonyLIV pic.twitter.com/jBighWsMOo

ITALY TEAM NEWS: Right-back Giovanni Di Lorenzo has been forced to withdraw through injury and has been replaced by Mattia De Sciglio, who will battle with Alessandro Florenzi for the right-back berth.

Three uncapped players in Joao Pedro, Luiz Felipe and Mattia Zaccagni have been called up for this pivotal fixture, but Mancini is sure to rely on his experienced lot, with Marco Verratti returning after a hip injury ruled him out of November’s final two group games.

Leonardo Bonucci has been called up despite spending a few weeks on the sidelines with a calf injury, so Alessandro Bastoni could very well get the nod here, and Giorgio Chiellini‘s participation is also in slight doubt due to his own injury woes this term.

Eljif Elmas and Tihomir Kostadinov must both serve suspensions for an accumulation of yellow cards. Vice-captain Enis Bardhi could be joined by Arijan Ademi and Boban Nikolov in the middle of the park, while striker Adis Jahovic has been forced to pull out due to injury.

With no more Goran Pandev operating at the tip of the attack, 19-goal winger Aleksandar Trajkovski will shoulder the goalscoring burden alongside striker Milan Ristovski.

When will Italy vs North Macedonia kick-off? Date

The World Cup playoff match between Portugal vs Turkey will kick-off on 25th March, 2022

What time will Italy vs North Macedonia kick-off? Time

Italy vs North Macedonia will kick-off at 1:15 AM

Where will Italy vs North Macedonia be played? Venue

Which TV channel will broadcast the World Cup Playoff Matches?

The Matches will be telecasted on Sony Sports Network in India. Fans can enjoy the match live on Sony Ten 1, 2, 3 and their HD Channels as well.

World Cup Playoffs LIVE Stream: Where can you live stream the Matches?

The World Cup Playoff matches will be available for streaming on SonyLiv and Jio TV. Fans will need to purchase a premium SonyLiv account to live stream all the matches.\