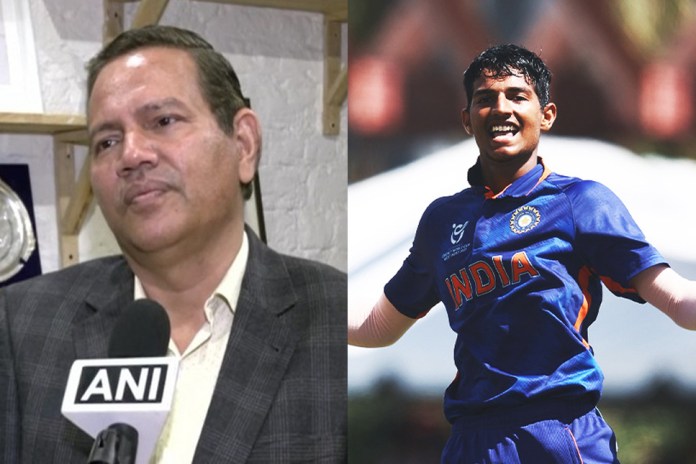 “It is a very proud feeling because Ranji Trophy holds a lot of reputation in Indian cricket’s domestic circuit and to score a century on debut is great. We were waiting as he had performed well in white-ball cricket and we are very proud of what he did in red-ball cricket,” Yash Dhull’s father told ANI. Yash Dhull was immediately drafted into Delhi’s Ranji Trophy team before the start of the season and was made to open where he played a superlative knock of 113 of 150 balls against Tamil Nadu.

“I would like to thank those in our association who have selected him and given him a chance. He has told me that he is timing the ball well so I will do well in white-ball as well as a red ball,” Vijay Dhull said.

Yash brought up his century off just 133 balls and went on to hit 18 boundaries. The Under-19 World Cup-winning skipper took the challenge of an opener and delivered the goods for his side.

“Youngsters will come into the team. He used to not open much. In domestic cricket, he used to open but he has opened for the first time at this level. So, it was a challenge for him but he has done better in that challenge,” Vijay Dhull said.

Yash Dhull is enjoying one success after another first captaining India to a fifth ICC Under-19 World Cup win. He was bought by Delhi Capitals for Rs 50 Lakh and is now a century on Ranji debut.

“In our family, we were just hoping that someone should pick him. Frankly speaking, Under-19 has a level but the level of IPL is very high there. All the stars of the world play there. We just wanted him to get picked and Delhi Capitals was his choice because he has played from the academy of Delhi and when he was picked then we were very happy,” Vijay Dhull said.

Yash Dhull’s father is also aware that his son can get distracted with so many successes at an early age. He wants his coach to keep guiding him as before.

“Post the IPL auction I spoke to him and congratulated him. It was an emotional moment for us. We were all emotional. At times we are a bit scared too. He should not get distracted. We have told his coaches that they should treat and guide him the way they used to do it earlier.”